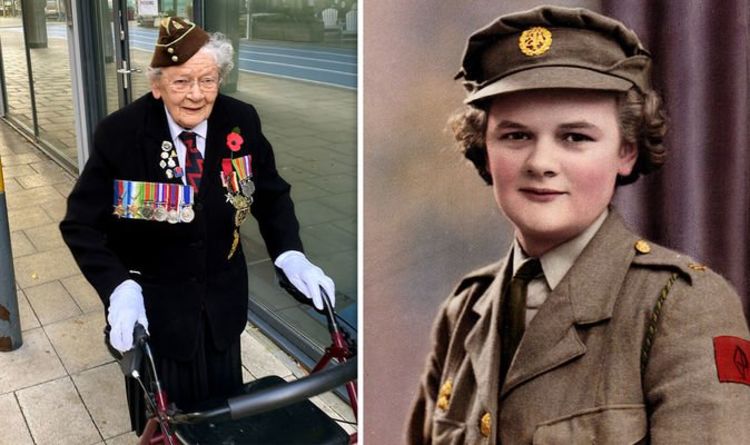 Barbara Weatherill is 96 years old, but the decisions she made as a teenager still sound like they were yesterday. Perhaps the most upsetting of all came in January 1943. She had no intention of spending the remainder of the war in a converted munitions factory in the snow-capped Yorkshire Dales. No, she wanted to wear a uniform and serve the king and the country – her goal was to join the Women’s Army, otherwise known as the Auxiliary Territorial Service (ATS). Her parents were less enthusiastic. She was their precious only child and, at 17, still well below the age of conscription.

But Barbara (yesterday and today) was not easy to resist. She filled their Dentdale house with recruiting flyers – “especially the bathroom where I knew they would probably read them” – and made Mum and Dad sit down.

Barbara’s mother had served beef to the boys during World War I, but her daughter had loftier ideas.

“A cook? I didn’t want to be a cook! I wanted to register early so I could choose what I did in the military,” she recalls.

Discredited as an organization that offered little more than military skivvy in an unappealing serge uniform, ATS got off to a bad start after being formed in September 1938 as a female volunteer service.

Tied up by an anachronistic leader, Dame Helen Gywnne Vaughan, and known to employ the â€œwrong typeâ€ of women, it has been dubbed the Auxiliary Tarts Service in popular discourse.

This bad image was compounded by military thinking in the first half of the war: What were men fighting for if girls were forced to serve alongside them?

The sanctity of the home and its reassuring promise of abundance and peace was a tantalizing prospect for thousands of men living on rations in poor barracks.

But in 1941, the harsh realities of a full-scale conflict called for a giant overhaul. The additional power of the girls was desperately needed to fill the loopholes in the overloaded British war machine.

Faced with humiliation in Greece and North Africa, hemorrhages at sea, blitzes at home and very short of supplies, the government has taken the unprecedented decision to enlist women.

So 80 years ago today, Winston Churchill told the House of Commons that coercion is needed to attract more girls into the military.

It was a significant turnaround on the part of a prime minister who had long doubted the wisdom of forcing women to serve, believing that female conscription would demoralize men.

Churchill reassured MPs: “We are not proposing at this time to extend the compulsion to join services to all married women, not even to married women without children.”

Initially, the National Service Law (No2) was limited to the appeal of single women, aged 20 to 30 years.

By the time Barbara Weatherill applied in early 1943, the service had been renamed and promised “Action Through Adventure”. It meant one thing.

â€œI wanted to be a pilot. There was a thrill associated with driving. Yes, it was the same job as our queen and I trained in the same place, â€she explains.

Princess Elizabeth, like Barbara before her, had to persuade her father, George VI, who, like most middle-aged men in Britain, did not approve of young women in uniform.

Two months before the end of the war, just in time, HRH Elizabeth was finally cleared to join ATS.

Documents show that, unlike Barbara, the future queen was exempt from exercise, physical training and did not stay in the barracks.

Yet Barbara and Princess Elizabeth followed a clear path: many girls started the war wanting to break free from their narrow confines, and the main obstacle to this ambition was parental.

Today, Daphne Attridge is 98 years old. At the time, she was 18 and growing up in the small village of Feltwell in Norfolk.

â€œMy mom didn’t want me to go on ATS, nor Reg, my fiancÃ©. He worked with service girls, he said he knew what they looked like, â€she recalls.

Daphne remains fiercely protective of the service she credits as having changed her life, but in retrospect has some sympathy for Reg’s concern and concedes: I wouldn’t expect it at Feltwell anymore.

Daphne, emboldened by the new legislation, dumped dear Reg and pushed her cautious mother away.

â€œI was very, very enthusiastic but my mother said no. Then the law changed and I signed up early so I could get the job I wanted. “

She pauses, then continues, â€œMy school friend Dorothy was killed while serving at a gun site outside of Hull.

She was caught by falling shrapnel and died instantly. At just 18 in 1942, her friend, Dorothy Lemmon, was not old enough to vote, but she was old enough to give her life in the service of the nation.

Daphne is adamant that hasn’t stopped her from serving. She became a teleplotter for a spotlight company – the person who sent the commands that guided the spotlight to their targets.

Another young woman, Vera Waddington, was also inspired to strike back after a bomb nearly missed her home in Saltash, Cornwall.

Before being admitted to the service, like any other young woman, she suffered the humiliation of a medical ATS.

â€œIt was a young man who inspected me. I had seen the other girls come out and thought. “Crikey! “

This was not what Vera had bargained for when, aged 19, she decided to quit her job as a market gardener and enroll in ATS in Plymouth.

In the 1940s, modesty was abandoned in favor of national â€œhealth and hygieneâ€.

Fortified on air, exercise and agricultural work, Vera, now 99, was rated A1 and within weeks had been selected for specialist work at one of the many anti-aircraft gun sites in Great Britain with the AA command.

Assigned to work on a Predictor machine that estimated enemy aircraft headings, she was soon operating advanced technology at a time before computer programs where “non-combatant” girls guided anti-aircraft guns.

“Ooh yeah, you would see the seashells come up!” You could deviate an airplane from its path just by pulling, â€she recalls. Vera was fascinated by her new life. â€œYes, you could hear the shrapnel falling. Some of our daughters have been affected. We were young and dumb I guess, we never thought about it back thenâ€¦ it never occurred to me that I could get killed or anything.

Grace Taylor, another “gunner girl” who lied about her age to join at 17, nods. â€œWhen the sirens sounded you must have dropped everything and made your way to the command post, grabbed your steel helmet and walked away. No, not afraid. I don’t remember being scared.

She remembers defending Plymouth. â€œI remember one night we were in the right place, but there were just too many enemy planes. The flickering and noise were appalling.

A tin mug of hot chocolate at dawn was a little help for a girl whose identity was firmly anchored in the work she did. “We saw the bombs, you know, when they hit the city.”

Like Grace and Vera, Barbara would also be assigned to AA Command. â€œI was a driver for the anti-aircraft sites – very big trucks – Bedfords, Austins. We worked as hard as the male drivers, but they were paid 3s 6d a day, and we were paid two shillings. Have I complained? No! There was no one to complain to. It was a man’s world.

But before being released on the road, Barbara had to learn her trade.

â€œI trained in Camberley, Surrey, and we went through all kinds of mechanical tests to see if we were good with a screwdriver and wrench. I was lucky because I grew up next to a boy named Ken and he had Meccano!

Today Barbara is very proud to have trained as a driver at the same location as her future queen, but points out that her wartime service lasted two years longer and much more involved than that of Princess Elizabeth.

â€œWell bless her she didn’t take the full course at Camberley. She was exempt from physical training, exercise, gas trainingâ€¦ â€

Elizabeth also avoided barracks life, returning to Windsor Castle every evening. In contrast, Barbara, a naive only daughter, found life together to be an eye opener.

â€œThere was a woman – Marianne – who was as brutal as she could get, she was pretty open about being a prostitute. “

Barbara laughs: â€œI think the girls the princess trained with were handpicked! “

â€œThere were four of us standing near the Tomb of the Unknown Soldier, it was me and three men.

I was going to be the last, but they led me past, so I met the Queen first.

Almost exact contemporaries and both pilots in the ATS, the duo finally spoke. “But you know, I have no idea what she said to me.”

Apparently, this happens a lot when you meet the Queen.

Today Elizabeth II is the last living head of state to serve in World War II.

She and her comrades Barbara, Daphne, Vera and Grace are among the last standing veterans; a poignant and extraordinary reminder of the thousands of women who joined and served King and Country 80 years ago.

The WRAC Association supports all of the women who have served in ATS and WRAC, and offers support, fellowship and caring – all for Â£ 10 a year. Learn more at wraca.org.uk