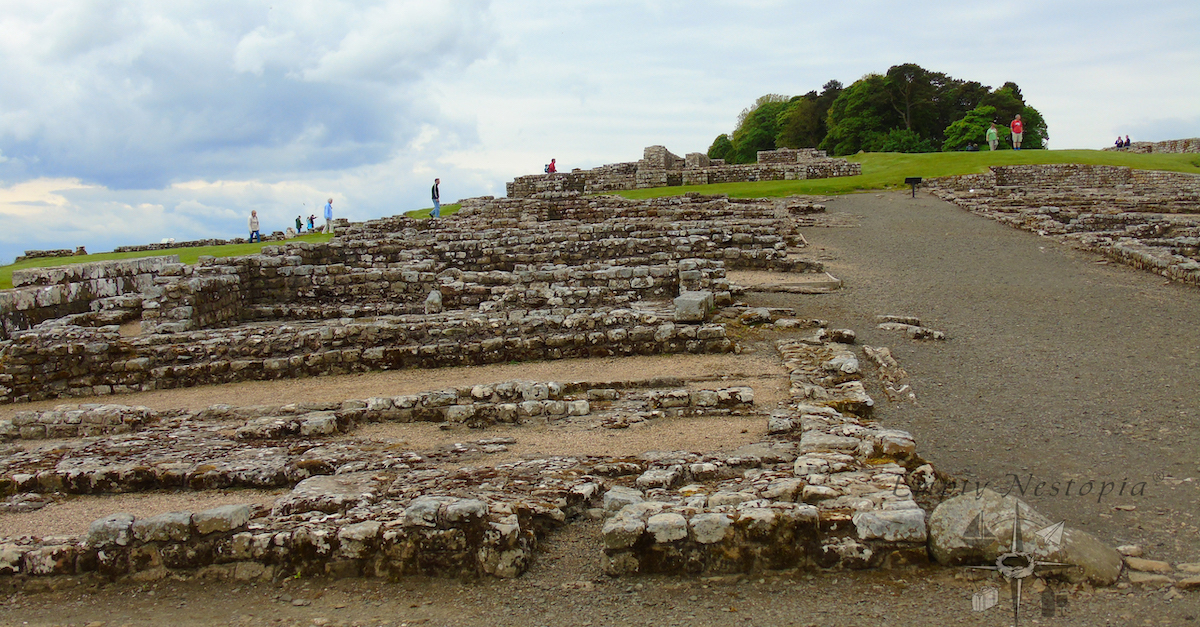 What is Hadrian’s Wall and why should you visit it

Hadrian’s Wall, built around 122 AD, is one of the greatest Roman monuments in Europe. Originally built as a defensive frontier for the Romans invading the conquered province of Britannia by Emperor Hadrian (Caesar Traianus Hadrianus) against Celtic tribes and barbarians trying to reclaim their lands, the wall also served as a form of customs control outposts through its various gates and forts that spanned sections of the wall, allowing the collection of taxes on goods.

Today, Hadrian’s Wall, considered one of Britain’s major iconic cultural symbols, is also a beloved ancient tourist attraction. Even though this ancient Roman attraction in Britannia was declared a World Heritage Site in 1987, it remains open to the public to explore and walk respectfully through the ruins.

History of the building

Construction of Hadrian’s Wall began in 122 AD, and it took nearly 6 years for 15,000 legionaries (citizen-soldiers of the Roman army) to construct the 73-mile-long wall. The legionnaires were made up of specialist units in the fields of architecture, masonry and engineering.

When first learning about the history of the wall, it was thought that the wall may have been built to mark the border between England and Scotland. In a later discovery, we learned that it actually marked the border between Roman Brittany to the south and unconquered Caledonia to the north.

The wall at one time stretched the full width of Britan west to east, from Wallsend on the River Tyne to Bowness-on-Solway for a total length of 73 modern miles. If you measure by the Roman unit of distance – thousand possum or a thousand paces, one pace being five Roman feet and a thousand of them being one Roman mile of 5,000 feet – the wall was 80 miles long. Today’s “modern” mile was standardized in 1593 as 8 furlongs (a furlong was the distance a team of oxen could plow in a single day – about 660 feet) or 5,280 feet.

During construction, the wall was divided into 53 sections. Each section was marked with a century-old stone on which were engraved the names of the centurions and their legions who built the wall. This collection of stones can be seen in the Clayton Collection at the Chester Museum.

Forts along the wall

The original wall design was just that, a wall, but it was later decided that forts and gates should be added along it. Mini-forts, or mile castles, and gates were placed at the mile markers and helped control the movement of people and market goods through and past the wall.

One of the most excavated forts is the site of Vindolanda, just south of Hadrian’s Wall. The nearest major city is Carlisle, England. Vindolanda was a notable defense garrison on Hadrian’s Wall and remained in use for 400 years after the Roman occupation of Britain was abandoned.

Almost 25% of Vindolanda has been excavated and further excavations continue throughout the year. Due to ongoing excavations, the Vindolanda Museum is able to add new finds on a regular annual basis. Some of the most interesting and remarkable finds were wooden toilet seats, a wooden toy sword, and ultra-thin wooden writing tablets with smooth ink writing. Their burial in oxygen-deprived piles on the floors of some of the deepest buried forts allowed the tablets to survive intact. They are the oldest surviving manuscript documents in Britain.

Another reason to put Vindolanda on your list of places to see when visiting Hadrian’s Wall is that you can book an excavation tour during which you can learn archeological digging skills and help with some of the excavations. Excavation tours can be booked from March to September and require a minimum commitment of two weeks. Visit their website for pricing and details.

Birdoswald Roman Fort is exceptionally well preserved and is the only fort along Hadrian’s Wall where the turf has been extensively excavated, uncovering the various phases of construction. Several of the forts along Hadrian’s Wall were still in use well after Roman occupation until the 5th century. Birdoswald was one of the first places where this activity was discovered, with excavations unearthing evidence of hall-like buildings above Roman granaries.

Birdoswald Fort is open to the public, please see their website for visit details.

Originally known as Vercovicium, ‘the place of efficient fighters’ to the Romans, Housesteads is one of the most complete and intact examples of a Roman fort in Britain. At its peak, the fort housed 800 infantry and calvary soldiers “redeemed” from conquered lands from all over the empire, but mainly from the German-speaking region of Tongeren (present-day Belgium).

Much of the main areas of Housesteads have been excavated, revealing major buildings within its defenses as well as a civilian village outside the main walls. Some of the preserved structures you will see here are the commandant’s house and his stables, a headquarters building where important strategic meetings took place, barrack blocks, granaries with stone pillars that supported a raised floor for air circulation, a full practicable line of the curtain wall fort with its gates, and the best preserved stone latrines and water channels of any Roman fort in Britain. If you’re curious how the latrines were “flushed”, check out the site during a rainstorm.

The museum located in the Civil Village is definitely a must-see during a visit. The museum’s collection shows what the personal life of a soldier stationed at the fort was like. Some of the artifacts you’ll see are studded boots with leather soles, cooking pots, French pottery, and Egyptian gemstones.

Pro Tip: Other Roman forts of note include Chesters Roman Fort and Corbridge Roman Fort (also the most northerly Roman city in Britain).

Trails along the wall

When visiting Hadrian’s Wall, there is more to do than explore the captains quarters, barracks and excavated latrines. Along many sections of the wall are footpaths which are part of the UK’s National Trail system. This series of trails traverses some of the most beautiful and stunning scenery in the UK.

The trails that follow Hadrian’s Wall are called the Hadrian’s Wall Trail and comprise approximately 84 miles stretching from Cumbria on the west coast to Newcastle Upon Tyne on the east coast. The path, although not particularly handicapped accessible in all areas, is easy enough for most relatively fit people and will take you through beautiful hills, steep border regions and bustling towns. of Newcastle and Carlile. Due to weather conditions affecting the trail, the best time to hike is between May and October.

The trails on Hadrian’s Wall Path are the Housesteads Trail, the Chesters Trail, and the Corbridge Trail.

The Housestead Trail will take you to sites less known to tourists, such as Walltown Crags and Windshields Wall. The Chesters Trail is 10 kilometers from Hexham town and is considered to be more relaxing, perhaps with an almost Zen-like feel and greater variety of sites. On Chesters Trail you will see the Temple of Mithras dedicated to the eastern god of light, Chesters Bridge Abutment and the Planetrees Roman Wall which shows how wall construction has changed over time. The Corbridge trail has a mix of urban and rural settings. This trail will take you through the village of Heddon-on-the-Wall, home to the longest unbroken section of Hadrian’s Wall at its originally intended width and the remains of the Roman Temple of Benwell, dedicated to the British god Antenociticus, who may have been “consulted” for war strategies.

I found it interesting that even though Hadrian’s Wall is one of Britain’s greatest monuments and has such significance to its history, much of the wall is owned and maintained by landowners private. The English Heritage and National Trust owns and maintains some of the most popular sections of the wall.

Visiting Hadrian’s Wall, the remains of the forts and the villages along the path of the wall is an amazing way to bring history to life. Walk in the footsteps of Roman soldiers garrisoned in forts and imagine what life was like for civilians in villages and markets providing goods and services. Regardless of what you do while exploring this amazing monument, it should be and well deserves to be on your list. When my family and I visited, we had a picnic on the wall. It was a fabulous lunch.

Planning an adventure in the UK? Don’t miss