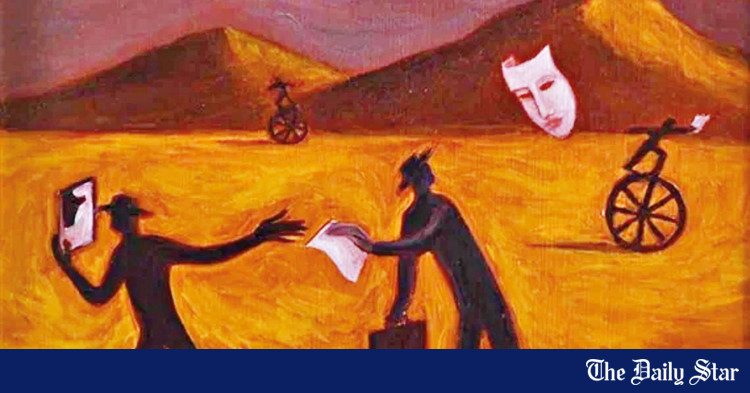 What he did | The star of the day

He joined the army at eighteen; a soldier through and through. He was tall, sturdy, ruddy-faced, and almost always courteous. Mahmud was my neighbor for almost five years. He had moved from the barely inhabited hilly terrain of Khagrachhari to the city of an elevated breeding ground, Old Dhaka. His decision to leave the empty, soulless life of the barracks might be closer to his own children – all of them were supposed to be in their prime.

“I have six,” he once told me. “Seven,” he corrected himself a second later. Two of each of his three ex-wives and a boy he had picked up during a deportation mission in Bangladesh on the Myanmar border when his platoon was fighting its way through the furry jungle of Ukhyia as there was a state of emergency in Rakhine State amid a series of messy battles between the Rohingya and the Myanmar army. The village had been looted just days before their arrival. “There were cut and burnt bodies strewn everywhere,” he proclaimed. Some people were still trying to save whatever they could. He drifted over an abandoned wreck when a little girl crawled out, speaking inaudible Arakanese and crying, asking him to pick up the sickly nine-month-old baby she was holding.

For all the latest news, follow the Daily Star’s Google News channel.

He took the baby; gave him dry food and a few days later handed the child over to the mobile Red Cross team. He also registered the baby as his own, giving him a Bangladeshi nickname “Babu Miah”.

I thought of inviting old Mahmud to join in an adda feast. My children have always enjoyed chatting with him; he was sarcastically funny but quite affable with them. However, he was nowhere to be found.

He was a career soldier; he had served in the United Nations Mission in Africa, Middle East Asia and other missions. But he couldn’t recall those memories in a cheerful mood. He had seen the good, the bad and the bad side of humanity for the umpteenth time.

Every morning I heard him working in his garden as music played from his tape recorder, always local folk songs. I usually saw him working on household chores, his old tape recorder; tinker with things, take them apart and put them back together. One evening he played something from the mystical melody of Lalon. A galaxy of memories fizzed through the beam of his consciousness and it plunged him into a surreal state of amazement. The music seemed to pour salt into his mute wounds as he hummed, “O the afflicted bird in the cage… How do you fly suppressing all your rage?”

More often than not, he and I basked in conducive camaraderie on the weekends as we talked through an opening in the wall that had separated our properties. From time to time, his old comrades went all the way to Tathari Bazar to come and visit him. But as far as I can remember, during these five years that he was my neighbor, his children never came to visit him.

Mahmud would occasionally tell his kaleidoscopic array of stories, often reminiscing about his childhood and adolescence. How he joined the army the day after his baccalaureate simply because he no longer wanted to go to school.

One lazy Friday lunchtime, as my family and I were returning from Jumma prayer, I had prepared to marinate the beef to cook in the backyard. I thought of inviting old Mahmud to join in an adda feast. My children have always enjoyed chatting with him; he was sarcastically funny but quite affable with them. However, he was nowhere to be found.

His old bicycle was parked outside the front door; the bike he was working on was in the garden with the little tape recorder. I heard music coming out of the garage. I called him but didn’t hear an answer.

Knocking on his front door, and getting no response, I inspected the wooden door at the side of his house, but it was locked. After tidying up the garden and cleaning the temporarily constructed chimney, I returned home and went about my business.

My wife was inside the house taking a nap and my kids were in the living room playing and watching the Friday morning show on TV. As I started to flirt with the makeshift home, expecting him to jump in with one of his friends, I suddenly heard a moan. At that moment, I decided to look through the hole in the door.

He was there on the ground. He had fallen from a chair under his workbench. I shouted his name, but he didn’t answer. I tried to open the door. Then, I smashed the window by removing the steep plank and unlocking it from the inside, I rushed to its side.

On his workbench were a gun, a bottle of aspirin, and a pile of old photos. He had slit his wrists with his old switchblade. Blood was spilled everywhere, his pajamas were draped in it. As I bent down, my white sandal suddenly got drenched in the crimson liquid. I panicked for a second and that’s when he turned his head slightly and hissed, “I’m sorry.

“I must call for help.” I could feel myself fainting like the flickering flame of a white-hot candle.

“No,” he stammered; her breathing was ragged and shallow, memories of the past flooding her as the music of Lalan Shai’s “Somoy Gele Sadhon Hobe Na” ripped from the old radio hanging on the other side of the wall.

“It’s too late” whispered Mahmud. “I am alone, my family is far away…”, he added. “All my dostos (buddies) are gone; I saw them die before me. The things we did – the things I did – are heartless, deleterious and unforgivable.”

“Don’t say that,” I retorted, holding her hand. His hands were limp, rough, cold and pale now.

My cell phone was in my pocket while I was still in a delirious slump. I could feel my voice breaking, my eyes filling up. He smiled one last time, through the thick mustache, and muttered “I’m sorry” one last time.

I got up, transfixed; my legs were shaking and I saw that the gun was not loaded. But he’d taken gluts of aspirin as if he couldn’t bear the choice of having an easy end.

Photographs of him and his former military-era buddies littered the floor. In one of these photos, I could infallibly recognize a much younger Mahmud. Next to the photographs was a stack of letters in envelopes with different names. It seemed like he wanted to go slow, unnoticed and unsaid; savoring his last moment with Lalon Shai.

The story of the subcontinent’s first feminist poet