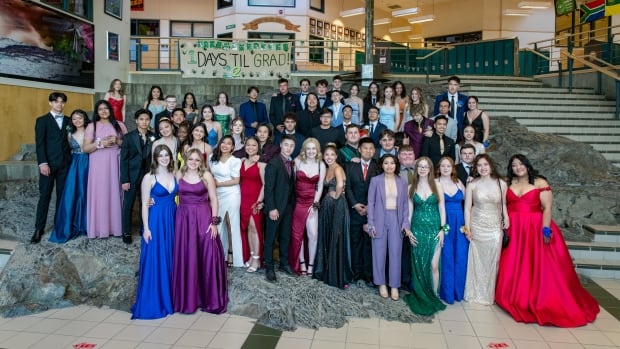 Shamar Bennett is one of eight graduate students from Mackenzie Mountain School in Norman Wells, where he started three years ago after leaving Jamaica.

Around town there will be signs with the faces of the graduates, and each of them will receive a gift that is a tradition at Mackenzie Mountain High School – personalized figurines, he said.

Bennett said he would take his figurine with him to Halifax, where he plans to study business at Dalhousie University.

His next attempt is also an important opportunity for him, a football player. He pushed to compete nationally and even raised funds to make those trips happen.

“I hope I can try out for the Dalhousie soccer team and succeed. God willing, it would be a really big moment for me.”

“We’re looking forward to transitioning to the outside world and seeing how we can build on what we’ve learned here in this small community,” he said.

Bennet said living in Norman Wells changed him to be more outgoing “because it’s so small here”.

“Everyone is for everyone and I think I’ve learned to love and care for others and have become much more… sensitive to other people’s thoughts and ideas.”

He thanked his teachers, his director and his mother for helping him along his journey, adding “I would like to say a big thank you for the North”.

He also had a message for his classmates.

“I just want to say a prayer that you have a good time wherever you go and do your best, that we all stay connected no matter what. I love you.”

The valedictorian of St. Patrick School in Yellowknife, Ava Applejohn, said her school’s 75 graduates have spent the past two years preparing for their degrees, half of them online.

“We’ve worked pretty hard to get here,” she said. “It’s just very different but we made it… It’s kind of crazy how far we’ve come.”

Ava said she looks forward to her freedom to choose where she wants to go to school and what to study.

“We all grew up with each other, you know? I think we’re all kind of looking forward to getting away from it all and going to bigger places, seeing more things and new people. It’s pretty exciting .”

A few weekends ago, Applejohn and his classmates threw a graduation party at the Folk on the Rocks site hosted by their parents.

“Everyone was having a great time. But it was almost sad because, I mean, these are the kids I grew up with,” Applejohn said.

“Knowing that this may be one of the last times we’re all together, celebrating and having fun with each other…it was nostalgic, but a bit bittersweet.”

Applejohn had some goodbye advice for his classmates.

“Don’t let the future intimidate you or scare you in any way. Let yourself be excited. Don’t let stress overwhelm you. Enjoy. Enjoy the little things. And also, keep in touch with your old friends from high school and your parents.”

They threw a Hollywood-themed celebration, and parents and staff even put on a 35mm film-themed exhibit of students from their infancy to the present day.

“Every square inch of this gymnasium has been transformed,” said Matthew Kirby, the school’s English teacher. Aunts and uncles flew in to celebrate, and some parents worked until midnight to transform the gym.

The walls were black curtains, with a large marquee tent and director’s chair for each graduate and a sight rare at Fort Good Hope – palm trees, he said.

The community held a party and celebration for the students, with a speech by Chief Tommy Kakfwi and Edwin Erutse, president of the Yamoga Land Corporation.

Chief Kafwi reminded the students of his own educational experiences and how proud he was of them.

The event was “an absolute celebration of their accomplishments with the entire community involved,” Kirby said.

Starting in late February, students had a long way to go, he said, due to the pandemic.

“I am deeply proud and they have done an amazing job working their way, step by step through the times of COVID and over the past semester,” he said. “It’s just a great honor for me to be their teacher.”