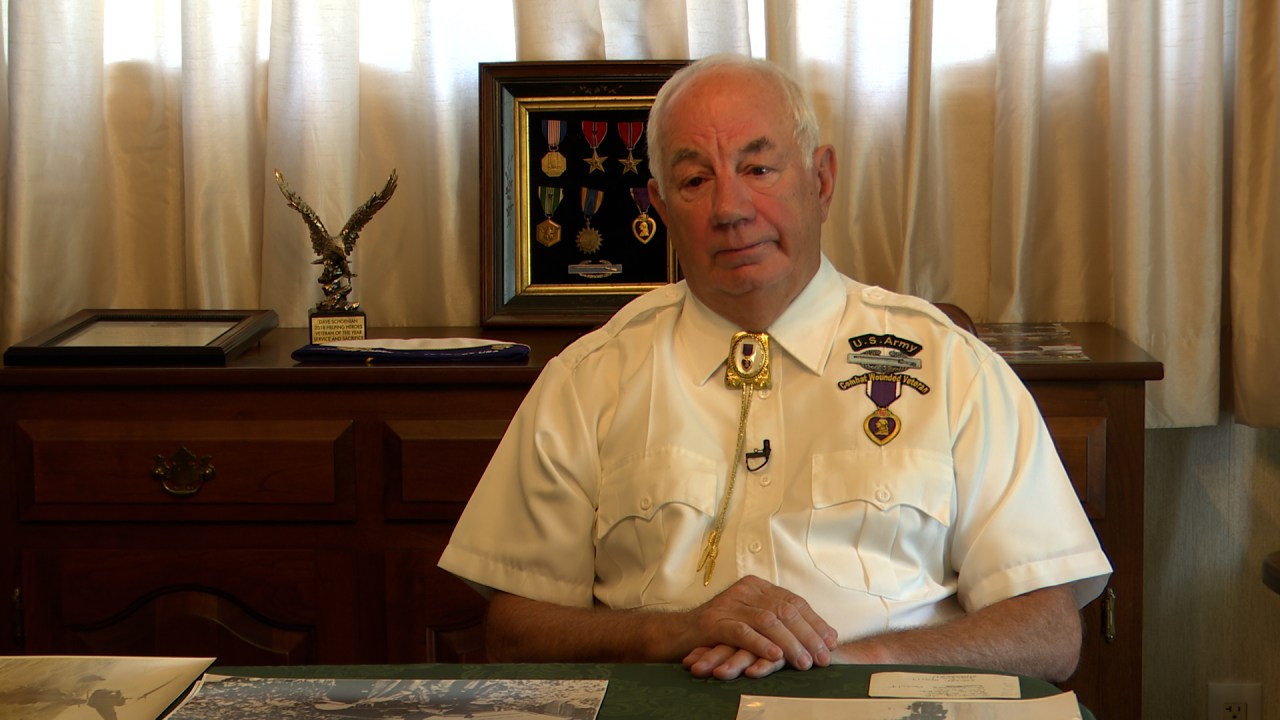 GLEN DALE, W.Va. (WTRF) — Many veterans may say that service doesn’t end when you’re released. If your experiences don’t stay with you, the commitment to helping others does.

As a leader in Vietnam, he pledged to ensure the safety of his men. At home, he always honors this promise to serve his brothers.

1967 I put on a uniform. I took an oath to this country. This uniform has never come off, ever. I could physically hang it in the closet. I might have turned off the light, but that uniform never came off.

Physically, Dave Schoenian no longer wears his military uniform. Emotionally, he never took it away when it comes to preserving the memory of friends he lost in Vietnam, keeping in touch with those who are still there, serving the community or giving back a last salute to a soldier.

I won’t let them be forgotten by Charlie Company. It will not happen.

His life changed forever after he was drafted into the army.

Coming from a family with several members who served in World War II, in various branches, I had never considered the fact that I was going to be drafted. Actually, I didn’t know what the Vietnam War was. I didn’t pay that much attention to it.

Schoenian recalls working in Illinois with his father on a construction site when he received his draft notice from Marshall County.

I didn’t have to go to Vietnam. I was an only child. I could have gotten away with it, but after I finished training, I said I was no better than the others. I’m going.

He went to Fort Bragg for basic training, Vietnamese infantry readiness at Fort Polk, then NCO (non-commissioned officer) school at Fort Benning, where he was trained by Vietnam veterans .

Schoenian would be part of the 90th Replacement Company of the 9th Infantry Division, 2nd Brigade. Once in Vietnam, he was assigned to the Mobile Riverine Force, which was a naval task force. Schoenian spent 12 months in the Mekong Delta as part of this force.

Army troops would barrack on navy ships on the widest part of the river. When it was time to go on a mission, they were brought on landing craft through narrow channels.

Schoenian recalls the tense moments in the canals waiting for the landing craft doors to open.

What we got into was just heartbreaking. When that ramp goes down, you don’t know what’s down there. You have to navigate the mud, get into the jungle foliage, and you don’t know who’s in there.

It was quite an experience and I will give credit to the Navy. They had it as hard as we did because when these things came under attack, these rockets penetrated these metal turrets and everything and that’s where I got hurt.

Schoenian explains that it was only a few months after his stay in Vietnam. It was a bad week with multiple losses in his business. And that moment would mark the beginning of his combat experience.

I just traded places with a guy and when the rocket hit him he blew his leg off. Tossed me in the back of the craft with about six others and was the least injured.

Schoenian recovered and was able to return to duty.

But that’s when I knew it was going to be a long year.

Schoenian was part of 49 combat missions, plus all amphibious missions with Navy ships. Each time he spent a few days on this mission, then he was picked up and sent back to the ship.

Beyond the job given to him, he says the biggest mission was to survive and protect his men.

It’s just a difficult thing when you have to wrap a body and put it in a poncho. You don’t get used to it, but you don’t have time. The missions continue. You don’t give up. You don’t call time out. You keep moving. You continue to fight.

He went to great lengths to do so.

As Schoenian sat before his medals recalling those experiences in Vietnam, there is only one medal that really matters, according to Schoenian, awarded for saving two men from a fast current.

They were my men. They were swept away. By the grace of God I found them underwater in full gear, I was able to bring them both back.

After a year in Vietnam, Schoenian knew it was time to come home.

I had been promoted to staff sergeant, platoon sergeant, and over the past few months I just decided that if I went back and did the same job, I probably wouldn’t come home.

He was released in July 1969 and was home in Glen Dale within three days.

Although he physically left the country, the memories never left him. Schoenian says it affected him throughout his life. He struggled with the guilt and trauma of survivors who never went away. He thanks his family, his friends and especially his wife for helping him get out of it.

Being a veteran’s wife is one of the hardest jobs because they go through PTSD and nights. My wife just couldn’t touch me at night. Eventually we had to sleep separately for a while because I was fighting all night.

Although he got the help he needed years later, Schoenian said he never wanted to forget his experiences.

A lot of people say that in the short time you were in Vietnam, how can that control what you do? Well, this stuff is forever. I don’t want to forget my dead or wounded men. I don’t want to close this. I pay homage to them. They took me home.

He serves the veteran community in that area in many ways and told 7News that his phone is always on for any veteran who needs him at all hours of the day.

When talking about his service now, Schoenian praises his time as a member of the Military Order of the Purple Heart.

This Purple Heart group, these prisoners of war from Iwo Jima, Korea, accepted me. I knew then that I had succeeded. They always said in Vietnam “Welcome home”. Well, I was coming home.

He may be more committed to being part of the Moundsville Veterans Honor Guard.

It’s an honor for me to bend down and give this family member this folded flag and give him the words he wants here. God gave me this gift so I could do it and I’m proud to do it.

Schoenian considers it an honor to present a veteran’s family with the folded flag, and said it is a gift from God to be able to do so.