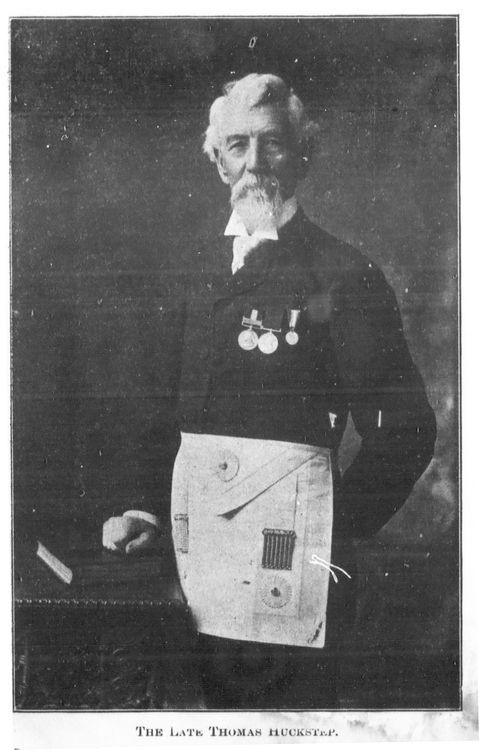 Thomas Huckstep was a soldier of the Queen

The hard life of a soldier in Queen Victoria’s “little army” is told in Thomas Huckstep’s The Life and Advent streets of an Old Soldier (1910). Huckstep had spent 50 years in the service of Queen and Country. Its 40-page booklet was written as Huckstep was near death at Alexandra and Marine Hospital in Goderich. At 25 cents a copy, the proceeds from the sale went to support his elderly widow.

Thomas Huckstep was born on January 25, 1833 in Strabane, Ireland. His father was a private in the 58th Regiment of Foot. Huckstep grew up around the barracks of his father’s regiment and, from an early age, witnessed the brutality of Victorian military life. One of his earliest memories was seeing two soldiers receive 300 lashes for an unknown offence.

Huckstep’s family ties were loose at best. The names of his immediate family members are not recorded. His mother died in 1836. His brother, in 1839, joined his father’s regiment and was sent to New Zealand to put down a Maori rebellion and was never heard from again.

Shortly after Huckstep’s father remarried, young Huckstep was enrolled at the Royal Hibernian Military School for orphan children of British soldiers. Shortly after Huckstep settled into school, his father paid him one last visit. His father brought young Thomas tea cakes, told his son that he was leaving the army, bade him farewell and abandoned him. Huckstep made no further mention of his father.

The Royal Hibernian Military School was founded in 1769 in Dublin, Ireland. He provided business training to the children of the children of deceased or impoverished soldiers. When Huckstep arrived at school, he was given a uniform and assigned to a company. The daily school routine mirrored the military. Huckstep recalled the “greater regularity in school”. Every morning, the 240 boys and 80 girls washed with soap in basins. The boots were blackened and the buttons waxed. Twice a week they received fresh linen and spare socks. Their day began in training where the children knelt and said their prayers before “being led to their trades”. They lived a spartan existence but it was better than the life of a Victorian child on the streets fighting for survival.

Despite the harsh existence, Huckstep said “I made myself happy” and adjusted well to school life. Soon after, Huckstep ‘got noticed’ and was given the post of nurse which involved delivering messages ‘all over Dublin’ and met such notables as the Earl of Grey, the Lord Lieutenant of Ireland.

In 1847, “as all were dead to me and my heart was light”, Huckstep enlisted in the 92nd Highlanders then stationed at Limerick. He became a musician and learned to play the drum and the bugle. An enlistment term in the army was 21 years. Huckstep, in theory, received a shilling (16 pence) a day, but after deducting nine pence for rations, three pence for washing and a penny for the haircut, he was left with a pittance of three pence which was often late. .

While stationed on the island of Jersey in 1853, Huckster was promoted to corporal and assumed command of the drum and pipe band. He was in charge of 18 to 20 boys and taught them the 52 bugle calls that regulated military activity.

One night a sergeant, in the presence of several witnesses, ordered Huckstep that there would be no bugle call for morning practice.

The next morning, Huckstep was called before an officer and asked why there was no bugle call. Huckstep explained his order but was silenced and placed under arrest for disobedience, dereliction of duty and lying to the warrant officer.

When Huckstep requested a court martial as was his right under the Queen’s Regulations and Orders, it was refused because the adjutant, who was drunk, told him that “he would not believe a word that was coming out of his mouth.

Without a proper hearing, Huckstep was found guilty and stripped of his rank.

According to Huckstep, his accusations were staged. The warrant officer wanted another man to lead the fife and drum band. False accusations against Huckstep were the easiest way to get rid of him. Huckstep observed that “there were many laws but no justice.”

While stationed on the island of Corfu near Greece, Huckstep recounts the execution of a soldier convicted of insubordination for striking the sergeant major and throwing his cap at the colonel. The punishment caused unease among the ranks drawn up in a hollow square to watch the execution by firing squad. The regimental chaplain was slow to get the condemned man out of his cell, perhaps in the hope that the colonel would grant clemency.

The Greek government protested the execution because it took place on Greek soil.

The wife of the officer who sentenced the soldier asked him for clemency, but “because he was a gentleman of honour” he “wouldn’t change his mind”. The gentleman’s honor cost the soldier his life. His wife left him and his son, who was on his way to Corfu, was drowned in what the soldiers believed was divine retribution.

Throughout her long service, Huckstep served in Corfu, Gibraltar, Malta, Greece and Ireland. Around 1853, Huckstep was transferred to the Regimental Depot on the Island of Jersey in the Channel Islands. When the call went out for volunteers to go to the Crimean War, over 300 men showed up. Huckstep was not one of them since he had just married Louise Fouzier, a Frenchwoman. It remained stationed in the British Isles on garrison duty throughout the Crimean conflict.

Around 1857, Huckstep responded to a call for volunteers for the Royal Canadian Rifles, a regiment formed in 1840 to defend the Canadian border. With free rations and barracks accommodation for his family, Huckstep immediately volunteered. Nearly 200 long-serving soldiers from nearly every regiment in the British Army and hundreds of their dependents boarded the sailing ship Argonaut bound for a new life in Canada.

After a 42-day crossing, the Huckstep family landed in Quebec. Huckstep was stationed at Kingston Garrison until 1860, then spent two years in the Niagara Peninsula.

During the Fenian threat in 1866, Huckstep was sent to St John, New Brunswick to protect against an incursion there.

In 1867, Huckstep was discharged from the army and “anchored at Goderich” where he “made a home” and his family with a small military pension.

Adjusting to civilian life was a challenge for Huckstep. His first manual laborer jobs were not “very appealing” because his “hands were soft and I had never done laborer work” before.

He dug wells, hauled stones from the Maitland River, worked in a carding mill and other odd jobs. Yet with the princely earnings of 75 cents a day, he was able to rent a substantial house for $3 a month.

At some point he became a born-again Methodist and vowed to quit drinking. In 1868 Huckstep joined the Maitland Masonic Lodge and became one of its most distinguished members.

Huckstep served with No. 1 Company of the 33rd Huron Regiment while residing in Goderich. Despite his extensive military experience, he never rose above the rank of corporal but remained with the 33rd Regiment for over 30 years. He was the senior member of the regiment.

His first wife, Louise, with whom he had three daughters and a son, died in 1870. He married Janet Cook, 17 years his junior, for whose benefit his libretto was written.

When he died at Alexandra Hospital on August 8, 1910, the story of his life as a soldier was about the only thing of value he could leave to his widow. It’s unclear how his widow fared with book sales, but Huckstep’s story is an invaluable voice from the ‘thin red line’ ranks of a former soldier to the Queen who nobly did his duty. well.