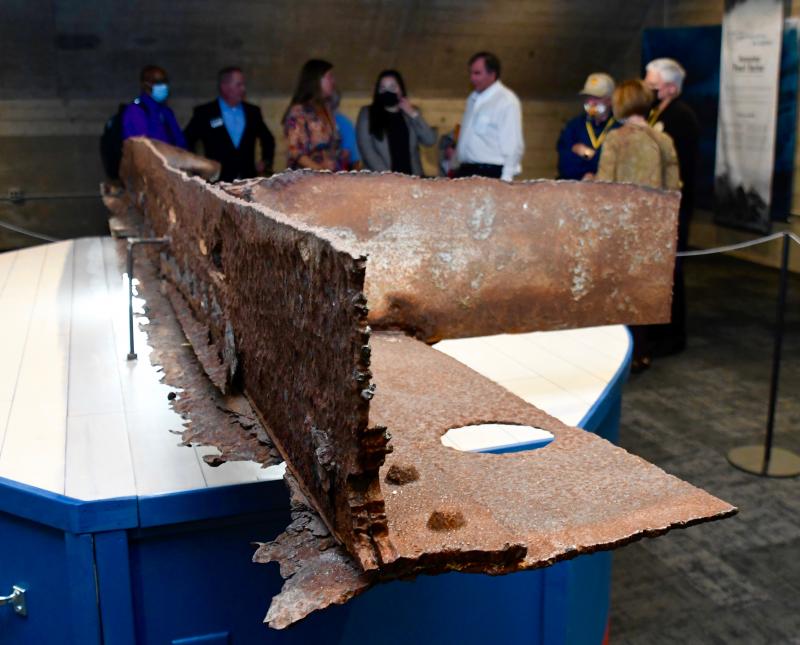 The Oil Still Bleeds: A Relic and Souvenir from the USS Arizona Battleship Exhibit was unveiled on September 23 to a large crowd of guests, family members of veterans who served at Pearl Harbor, sponsors and d ‘elected.

The exhibit, in the North Gun Hall of the Fort Miles Museum in Cape Henlopen State Park, opened to the public on September 25, Delaware Defense Day. The centerpiece of the exhibit is a relic of the USS Arizona, which was sunk on December 7, 1941, in a surprise attack on Pearl Harbor, Hawaii. The 11-foot, 650-pound relic was secured by the Fort Miles Historical Association.

Two large video screens show footage of the attack with sound effects, and the sinking and Arizona’s final resting place, which is now a national memorial. Wall hangings throughout the room depict the history of Pearl Harbor, Arizona, and Delaware during WWII.

The exhibition is the result of a collaboration between Horizon Philanthropic Services and the Fort Miles Historical Association. Horizon was able to raise $ 280,000 to create the exhibit. The main sponsor is the Christian and Julie Hudson Foundation, with over 60 other supporting sponsors.

Horizon Philanthropic Services Senior Associate and Exhibit Curator Heidi Nasstrom Evans said the 15-month exhibit will open in stages and include a series of lectures and special tours for veterans groups.

Ceremony at the museum
Jim Pierce, President of the Fort Miles Museum, began the ceremony in a large tent outside the museum by thanking Fort Miles Historical Association President Emeritus and Association Co-Founder Gary Wray. â€œYour vision has brought us to this tonight,â€ he said.

Pierce said the exhibit is a kick-off for the museum’s future plans for redesign, expansion and renovation. â€œThis is an important step for us as we build a national museum,â€ he said.

FMHA board member Cliff Geisler, who chaired the committee to secure the Arizona relic, said the artifact was cut from the sunken ship when crews removed all the steel above the waterline along the row of battleships where the ship sank in a surprise attack on Pearl Harbor by the Japanese, killing 1,177 sailors and Marines.

The wreckage removed was moved to a remote location on the Hawaiian base. After several requests from museums for an Arizona artifact, Congress passed legislation in 1995 establishing a path for donations based on specific criteria, Geisler said. After two years of work, he said, the relic was donated to the museum and FedEx covered all shipping costs from Hawaii to Fort Miles.

The Arizona Relic completes an association mission to create a bookend exhibit of artifacts from the beginning and end of WWII. The attack on Pearl Harbor marked the United States’ entry into the war, and a restored display of a USS Missouri rifle barrel at the entrance to the museum is symbolic of the war’s end. The Japanese signed surrender documents under the huge gun cannons on the USS Missouri.

Lewes Mayor Ted Becker said it was remarkable to see the transformation of Fort Miles over the past 20 years. â€œIt will be a world-class museum with national recognition,â€ he said.

Senator Ernie Lopez, R-Lewes, said what the Fort Miles Bunker Busters and other volunteers have been doing is not just for today, but for many Delawarens in the future. â€œWe are here to celebrate this treasure in East Sussex,â€ he said.

Representative Ruth Briggs King, R-Georgetown, said she visited the Arizona Memorial in Hawaii. â€œThe same respect and honor is given to this site,â€ she said.

Looking for a sign: Air Force vet stands out in Yokota with suicide awareness message