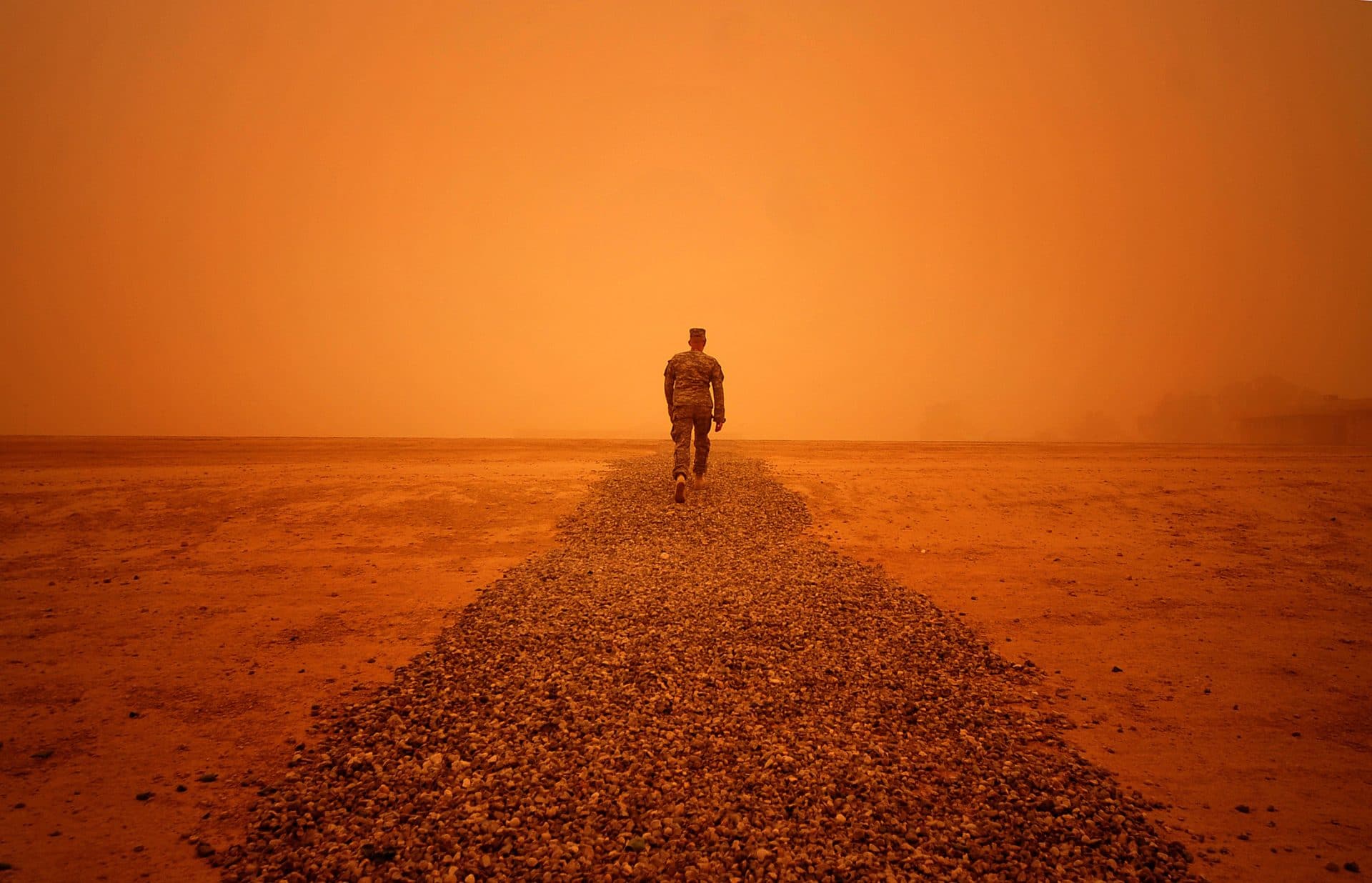 The Case for a War on Climate Change

Sandstorm in Iraq. Image by David Mark from Pixabay

When I became a climate activist in early 2019, I focused on issues at the forefront of popular discourse: coal, cars, air travel, agriculture, and construction. I also touched on maritime transport, as my hometown of Hamburg in northern Germany is home to one of the largest ports in Europe. But as climate protests escalated, peaking at 1.4 million people in Germany alone in September of the same year, the rhetoric has not kept pace. The same basic facts are being debated today; the implementation of the solution has only just begun; and even the late COP26 climate conference in Glasgow did not lead to a paradigm shift.

As a security analyst accustomed to working with soldiers from a variety of backgrounds, I find that the security perspective is largely absent from the discourse. The climate crisis is here, and security professionals like myself now need to fully understand how affected we are and what our role can be in resolving it, as it directly cuts across our core purpose.

Safety, remember, that’s what it is about. We are not protecting the climate. We protect ourselves.

British army Strategic approach to climate change and sustainability, released in March, and U.S. intelligence community reports released in late October provide insight into how climate change will affect national security and what defense agencies need to do in response. But even with this growing awareness, many security professionals are still moving too slowly on climate change. Its impacts on their work will be so profound that they cannot afford to shift gears only when politicians do. They themselves must recognize the scale of the threat, advocate for adequate responses and become agents of change.

I am not asking my colleagues, in uniform or not, to join climate activists on the streets, although they are welcome to do so. But security professionals must reframe the current climate unrest and treat it as a military-like threat that requires immediate and decisive action.

The climate-security link. In 2020, when I saw US National Guard helicopters rescuing people from California wildfires and Australian Navy ships carrying out amphibious evacuations from bushfire-ravaged beaches, I began to link my perspective as a climate activist to my work and education in security.

Climate security as a subfield of security studies has its origins in the 1970s, but received little recognition until after the end of the Cold War. This is because the threat of nuclear annihilation has eclipsed everything else.

Newsletter readers are of course familiar with the misconception that a conflict between two nuclear powers is the worst danger imaginable. Observers of growing tensions between China and the United States, including myself, tend to take every new warhead, submarine, or strategic bomber very seriously, and we invest time and effort in finding the right ones. nuances.

With ever-increasing pressure from China on Taiwan and a heated debate among Western academics and politicians over whether Taiwan’s defense would justify it becoming a casus belli involving NATO, the Quadrilateral Security Dialogue (United States, Australia, India and Japan), the AUKUS Trilateral Security Pact (Australia, United Kingdom and United States) or any other constellation of forces opposed to China, the ultimate threat has returned and overshadows a much more concrete danger.

The dangers of a war between great powers, as real as they are, remain hypothetical until the first shots are fired. The carbon levels in our atmosphere, on the other hand, are increasing day by day. They are closely watched but remain uncontrolled, not for lack of information but for lack of leadership and will. This is the dilemma of securing climate change – of creating a security community that, for the past 20 years, has waged a global war on terrorism and was busy watching China aware it has. missed something big.

This year again, heat records have been broken and widespread destruction caused by extreme weather conditions. Humanity’s desperate attachment to every drop of fossil fuel not only increases the frequency and intensity of such tragedies, but also ensures greater ones to come.

Some have laughed at Greta Thunberg when she used the metaphor of humanity’s house on fire. Some said she was exaggerating. Few laugh as communities from California to Siberia, Turkey to Australia, helplessly watch fires devour everything in their path.

A military mentality. In 2020, Prince Charles said: â€œWe must now put ourselves on a war footing, approaching our action from the perspective of a military-style campaign. More recently, John Kerry, President Biden’s climate envoy, said the world needs a “war mentality” to tackle climate change. They weren’t the first, but they’re on to something.

Leaders could have cut emissions while there was still time to limit global warming to the relatively safe level of 1.5 degrees Celsius above pre-industrial temperatures. Their neglect has led us to the predicament of today: a civilization that cannot function without fossil fuels and the massive exploitation of nature, which in turn threaten the very existence of civilization.

Instead of succumbing to a feeling of helplessness, we need a different mindset. A military mindset that can make uncomfortable but strategic decisions – based on ends, means and means, for the security of all of us – and which can effectively deploy the resources at our disposal is the sensible approach.

Some of the largest investments in history have been made for security purposes. To combat World War II, the United States, United Kingdom, Soviet Union and their allies refocused all of their economies as political leaders recognized they faced existential threats. Today the world faces existential threats again, but political leaders have yet to rise to the task. Several voices have called for a climate effort similar to the Manhattan Project. I believe this idea failed because it suggests an escape route – miraculous technology that could change everything and allow climate action to be delayed continuously. The value of the Manhattan Project analogy is that it underscores the magnitude of the effort required.

But for such a massive effort to be implemented, state actors would have to treat climate change as a security issue, in the same way they treat war. This can be done by escalating rhetoric that anticipates â€œclimate lag talkâ€ and emphasizes the non-negotiable nature of the threat. Once established as a threat of war, climate change can be treated with the seriousness, urgency, and resources it deserves.

The recent United States National Intelligence Climate Change estimate, the Department of Defense climate risk analysis, the Department of Homeland Security’s climate action plan, and the White House special report on migration Climate change does not contain spectacular new information, but it does show that climate change has gained a new position in the security considerations of the current administration. Yet he is not yet treated as a threat of war.

Even under the Trump administration, the U.S. military took significant initiatives to secure climate change, but many current observers and actors on the ground are still focused on how climate change will affect traditional deployment patterns of the world. ‘army. They ask, “How can a security appliance prepare for increased migration?” or “Where is climate change creating new vulnerabilities for our forces?” Few see the role of the US, Chinese and other armed forces as some of the world’s biggest emitters of greenhouse gases, let alone include the military as an actor supposed to prevent global warming from overtaking it. the limits set by the Paris Agreement.

Security reframing. Globally, millions of men and women in the military identify themselves as providers of security. As time is running out and administrations prove to be bottlenecks, defense agencies must take the lead in redefining climate change as a security issue, a threat of war that has already started. The company has to come to the point where the installation of a solar panel by an army technician is considered a safety measure. It is not a question of replacing civilian initiatives, but of supplementing them with the powerful manpower, equipment and strategic thinking of the army. It is not a question of alienating soldiers from their role as combatants, but of giving them an additional dimension required by the circumstances.

To break it down: the question is not whether your tank needs better air conditioning, but what the military can do in research, development, logistics, intelligence, materiel and personnel to increase the overall security of the population.

Security professionals cannot afford to dwell on climate denial. They must see climate change as a threat to the people, stability, prosperity and territorial integrity of their country. Many officers I have spoken with, of various nationalities and backgrounds, already understand the magnitude of the climate threat. Maintaining combat readiness is difficult when your helicopters evacuate civilians from forest fires, your military installations are damaged by extreme weather conditions, your army engineers are building bridges over swollen rivers, and your soldiers are shoveling fire. sandbags to stop the water, not the bullets.

The resources currently committed to sustaining and containing conflicts between major nations – which not surprisingly are also the biggest polluters – are the resources that are now needed elsewhere to mitigate the climate crisis. Without them we will not live to fight another day.