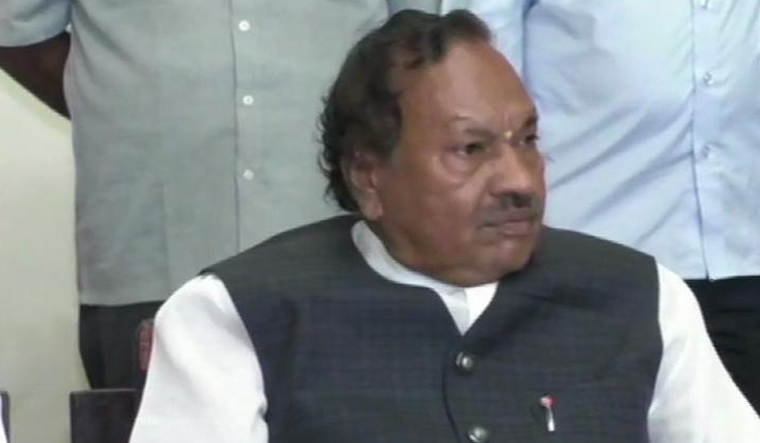 Congressional protests demanding the removal of Minister of Rural Development and Panchayat Raj, KS Eshwarappa, and that he be convicted of sedition over a declaration on the national flag, continued to rock assembly debates in Karnataka for the fourth consecutive day on Monday.

The assembly also saw the passage of four bills amid the din, and President Vishweshwar Hegde Kageri strongly opposed members of Congress who ‘unnecessarily’ brought up the RSS name during their protest in the house well.

The “day and night” protests by lawmakers in which they spend the night inside the assembly began on Thursday to demand Eshwarappa’s removal.

Recently, Eshwarappa had claimed that ‘Bhagwa dhwaj’ (saffron flag) might become the national flag in the future and then it could be hoisted on the Red Fort.

He had, however, declared that the tricolor was now the national flag and that it should be respected by all.

As the house gathered for the day, members of Congress gathered in the well of the house and began shouting slogans demanding action against Eshwarappa.

Slogans like – “Down, down BJP”, “Suspend Eshwarappa”, “Eshwarappa desha drohi (traitor)”, “Down Down the BJP desha drohi government”, “The president is doing justice”, “This government is the puppet of the RSS “, “We want the constitution, not Manuvada” – among other things tainted the procedure.

After the bills were passed, the speaker called on former chief minister and opposition leader Siddaramaiah to join in the discussion on the vote of thanks to the governor, and called on members of Congress to regain their seats, which was not heard by the main members of opposition parties, who in turn demanded “justice”.

“Dissent is common in a democracy, but we have a duty to lead the proceedings of this house. If the government has not agreed to your demands, protest outside and cooperate to lead the house. We must discuss development issues, people’s issues here,” he says.

JD(S) Deputy Leader Bandeppa Kashempur said his party had 31 members and wanted to raise several key issues regarding the people of the state and the farmers, and that they should be given the opportunity

“RSS is an organization with a nationalist ideology, they work to unite Hindus. You must cooperate with their efforts. Don’t bring RSS name, if you have political differences, correct it,” Kageri added.

As the chaos continued, the Speaker then adjourned the House for Tuesday.