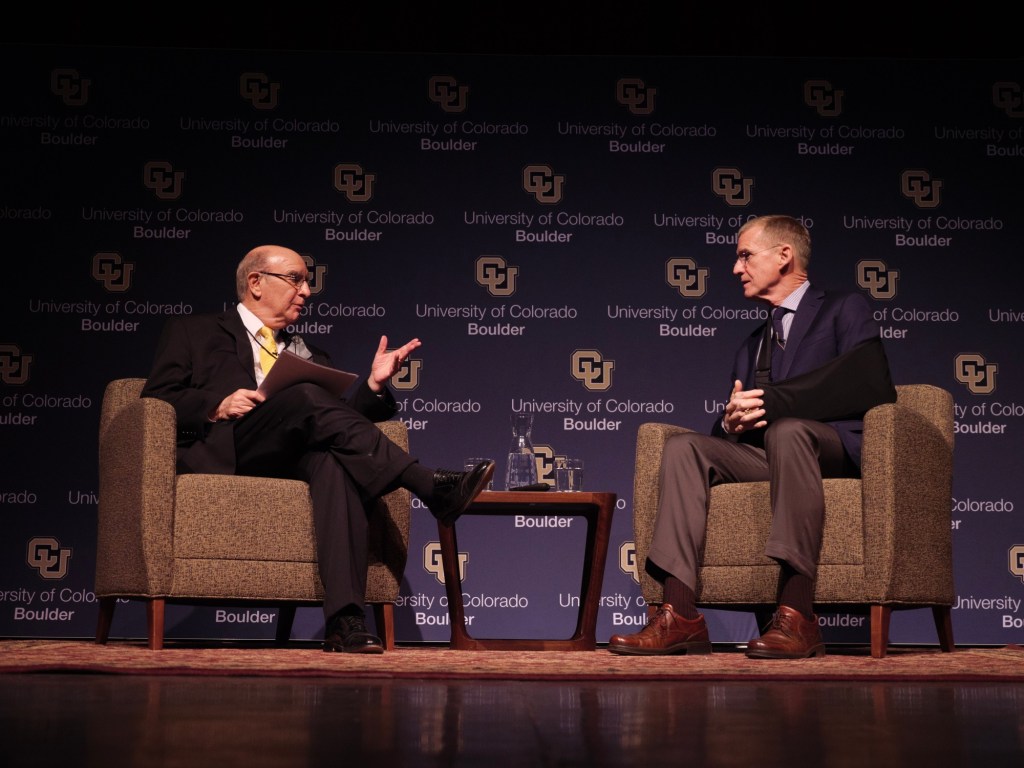 More than a decade ago, retired US Army General Stanley McChrystal was assigned to a mission in Afghanistan aimed at regaining control of territory ruled by the Taliban.

While working as a commander, McChrystal considered the myriad risks associated with every plan to seize territories. Yes, it would be easy to bomb an entire area and then walk in and take over, McChrystal said. But that would lose the confidence of Afghan civilians.

“You try to balance those two,” he said.

The risks of each plan are also different for command personnel versus the US or Afghan government or anyone else who might be affected by the plan.

“They all have to be considered because everyone’s risk is from their perspective,” McChrystal said.

McChrystal, who retired in 2010, spoke Monday night at the University of Colorado at Boulder as part of the Leo Hill Leadership Lecture Series.

CU Boulder officials said about 386 tickets were sold for the event.

This was the sixth series brought to CU Boulder by the Quigg and Virginia S. Newton Chair in Leadership, a position now held by Chancellor Philip DiStefano. The premise of the series is to expose students to leaders in multiple fields.

During the event, McChrystal shared risk mitigation tips based on information from his latest book, “Risk: A User’s Guide.”

People can’t spend their time preparing for specific crises, he said. Everyone must be prepared for anything and must be resilient to face whatever comes their way.

“I actually think if we’re thinking about risk, we have a risk problem, and I would say in many cases the biggest risk to us is us,” McChrystal said.

In the military, McChrystal trained and then taught others ways to mitigate risk by being prepared and rehearsing plans.

“When we went on operations, there was a risk that came from a certain chance – the effectiveness of the enemy – but everything we did was aimed at making ourselves stronger,” he said.

He now views risk as a mathematical equation: threat multiplied by vulnerability equals risk. It’s easy if someone can remove all threats or make themselves invulnerable. Then there’s no risk, McChrystal said. But in life, having no threat or being invulnerable isn’t always easy.

“What we have is agency on our vulnerability, on ourselves (and) on our organizations,” he said.

Risk control factors people can use to deal with threats include narrative, structure, diversity, timing, adaptability, action, technology, bias and leadership, McChrystal said. Each narrative is linked to communication.

“It’s a system that works to give us the ability to be resilient to the threats that come our way,” he said.

After McChrystal’s speech, DiStefano asked if he could provide some insight into the ongoing crisis in Ukraine.

McChrystal said he thought invading Russia could be a test.

The Russian military is highly unlikely to occupy Ukraine quickly or perfectly, McChrystal said. In addition, the new sanctions imposed by the United States and other countries will help prevent other Baltic states from being threatened by Russia.

“I think President Putin is in an extraordinarily dangerous position of personal power,” he said.