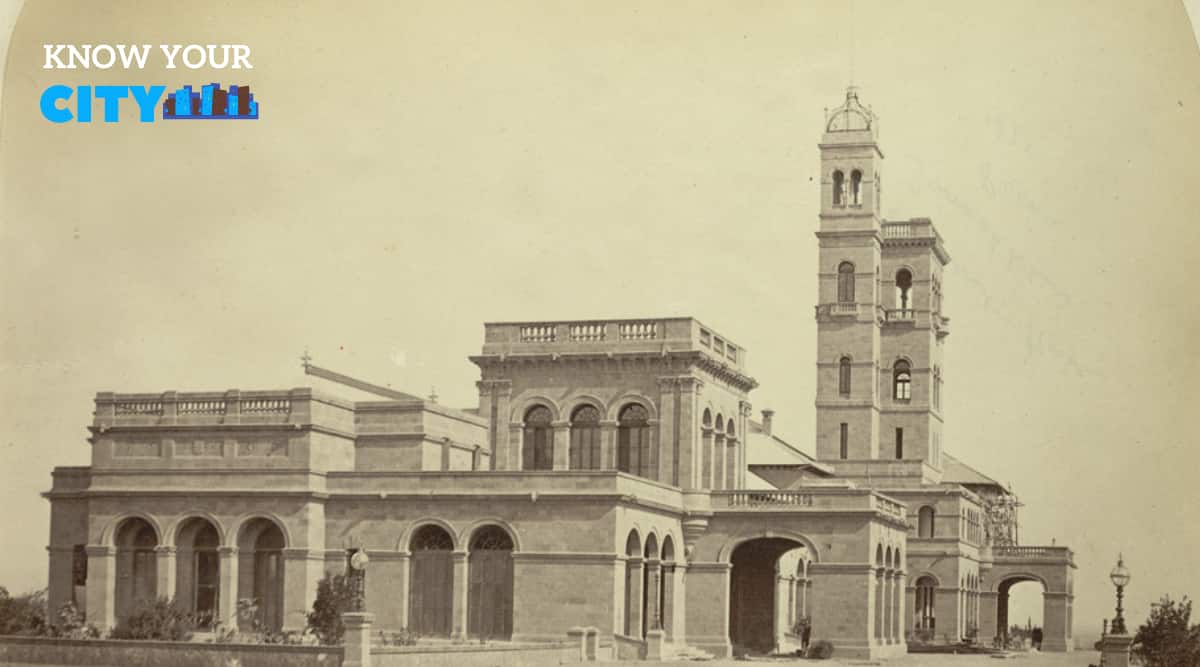 Know Your Town: When the University of Pune’s main building, the former residence of the government, was the subject of a scandal in the British Parliament

It was 1875 and the pound had crashed when the monsoon residence of the Governor of the Bombay Presidency, now the main building of Savitribai Phule Pune University (SPPU), became the subject of headlines newspapers in the UK and the center of heated debate in the British Parliament.

Built as the monsoon residence of the Governor of the British Presidency, Sir Bartle Frere who held the position from 1862 to 1867 had begun construction in 1864. However, by the time it was completed in 1871 the cost of the residence was 1.75 lakh pounds, almost six times the amount raised by the sale of the former governor’s residence.

The construction of such a lavish house in the wake of the Bombay cotton crash was harshly criticized and called by the British Parliament “a typical example of the extravagance and insubordination of the governors of Bombay”.

Sir Frere fiercely defended his action. However, he did not have the opportunity to stay in the house as the work was not completed until after he left India. His successor, Sir William Vesey FitzGerald, carried out the furnishing and decoration, and he in turn has been criticized for his extravagance, particularly for the ballroom’s £500 chandeliers, which still hang in the main building.

“The Spectator” in London described Frere in particularly uncharitable terms, calling him “one of the worst people to ever be named”. He was then sent to punishment stations in distant lands as a result of this insubordination.

On this sprawling premise, Poona University (now SPPU) was established in 1949 with Government House serving as the university’s main building, housing the Vice-Chancellor’s office, meeting rooms and offices administrative. The land adjoining the residence has been transformed into a vast European-style park.

Rahul Magar, Assistant Professor in the Department of History at SPPU, who teaches the elective subject “History of the City of Pune” at the department, explains the story behind the background of the construction of the main building.

“The mutiny of 1857 had a great effect on the configuration of British administration and until 1862 there were discussions to move the provincial capital to Pune, but this did not happen. However, what they did was they started new construction in and around Pune. In an earlier war with the Peshwas, the former British residence built at the Sangam or at the confluence of the Mula-Mutha River on the east bank was burnt down,” Magar said.

Osborne House, UK. James Trubshawe, who designed Government House, is said to have been inspired by the design of this former residence of British royalty.

“The new Governor’s residence was originally planned on a small cluster of land in Dapodi where there was a cluster of old bungalows which previously served as the residence of a British Madras Army soldier, Major Bank. But this location was considered too remote, then Ganeshkhind land was purchased. The site had symbolic importance to the British. The Battle of Kirkee was fought at this site in 1818 after which the British took control of Pune,” he added.

In 1864, when construction began, the aftermath of the 1857 mutiny was fresh. The Indian princely states had assumed that the British would sooner or later leave India and so the latter began to erect huge monuments to show that they would stay for a long time, Magar added.

Architecturally, the construction of the main building defies classification although its spiritual antecedents are Italian and the 80-foot flag tower has been described as a “Victorian interpretation of an Italian campanile”. The building designed by architect James Trubshawe, also the architect of several other important buildings such as the College of Engineering, District Court Complex, General Post office, was inspired by Prince Albert’s Osborne House on the Island of Watt.

While Magar states that stylistically the main building can be described as an eclectic mix of Indo-Saracenic, Italianate and Romanesque elements, in his preface to the report ‘Conservation of Main Building, University of Pune’, ecologist and architect Kiran Kalamdani states that the confusion and lack of direction that prevailed during the period is evident in the work of Government House in Pune.

“The house was divided into two parts; the southern part comprised all the public rooms, including an 80 x 30 foot ballroom and where the much-talked-about Belgian cut-glass chandelier still hangs. This room rises almost to the height of the entire building. There was an adjoining formal dining room and between these two rooms was a flower gallery, where guests could stroll. The north wing had the governor’s private rooms and about nine guest rooms. On the west facade, a formal terraced garden was created and deep arcaded verandas opened onto this space,” said Magar.

Besides the main residence, long single-storey outbuildings were built for the governor’s staff, designed in a barracks style.

Government House was the center of British social life during the monsoons. “While Mahabaleshwar was the governor’s summer residence, Pune was the monsoon residence. During the monsoon, the governor would arrive with his administrative entourage and live here. There were lots of parties and entertaining guests,” said said Magar, “A 300m long tunnel was built under the main building connecting it to the kitchen complex. The purpose was practical, to quickly transport food from the kitchens to the dining hall, unhindered by the rains. But the same tunnel also lays bare the class divide that prevailed then. They wanted workers to work but not be seen. The tunnel contributed to segregation.

If the essence of its history is known, several mysteries remain to be elucidated and pose challenges for historians, like an old photograph recently found which shows the presence of a half-wall in the lower part of the main building. . This wall is now a full wall indicating that the height of the half wall has been increased later.

“We don’t know who or why this wall was worked on. In 1897, Poona Plague Commissioner Charles Rand was shot dead on Ganeshkhind Road by the Chapekar brothers while returning from the Queen’s Coronation Diamond Jubilee Celebration held at Government House. We believe the wall was subsequently covered over for security reasons, but we are still looking for evidence,” Magar said.