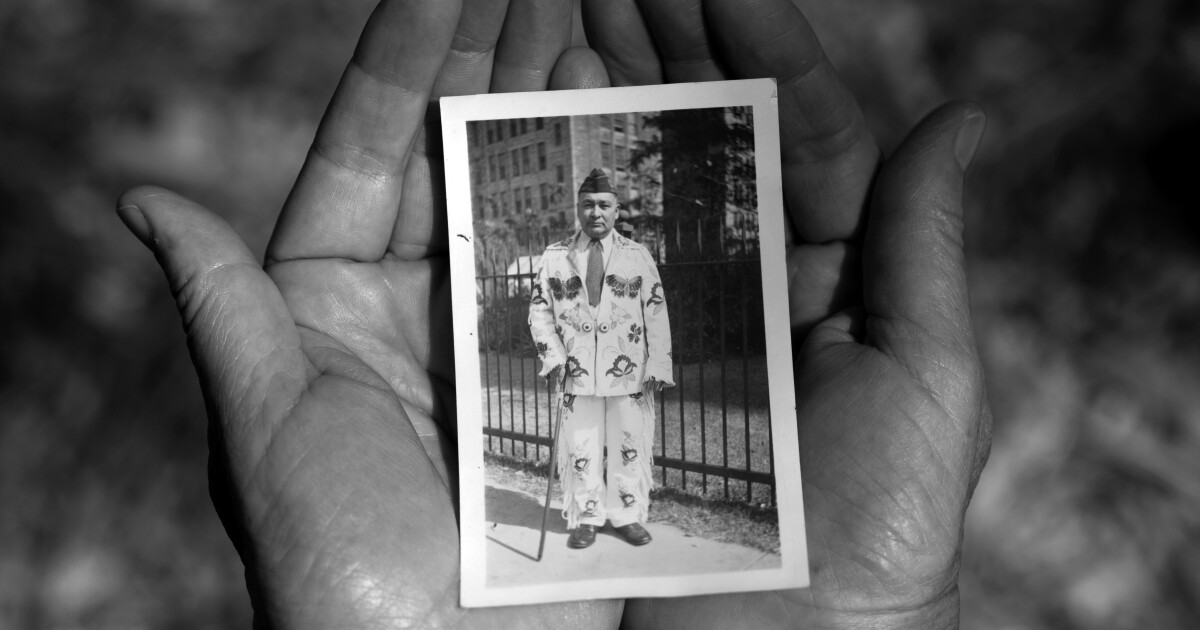 He fought for self-determination in a time of assimilation. Here are the items he left behind.

Photographer NÄ«a MacKnight never met her great-grandfather John B. McGillis, but she had a window into his life as an Anishinaabe man in early 20th-century America: a steam trunk he kept undated photographs and stray objects such as an address. book, a pair of horn-rimmed glasses and a single eagle feather. McGillis has lived through decades of oppressive actions against Indigenous peoples by the US government, and MacKnight says that in a world where he couldn’t be fully himself most of the time, this collection reveals how his great-grandfather worked to recover his identity.

â€œI was overjoyed to be able to keep my personal items,â€ MacKnight wrote in a Q&A with NPR. “I was also haunted that the only photographs he left marked a period of trauma and violence that Native Americans faced as a result of assimilation policies.”

Like many Aboriginal people his age, McGillis was forced to attend a residential school for Native American children. He also fought in World War I and then obtained a position in the United States Bureau of Indian Affairs, where he worked to improve employment opportunities for Indigenous peoples. MacKnight’s family say a man spoke his tribal language in the company of friends and relatives, while learning the language of the dominant white culture to expand opportunities for his people in their professional roles.

Using his skills as a documentary photographer and interviews with relatives and family friends, MacKnight reconstructs the history of McGillis and reflects on questions of identity and self-determination that persist to this day. She shared an overview of her process with NPR.

What story do you hope these photographs tell?

I hope my great-grandfather’s story invites viewers to expand their perception of indigeneity and further recognize the various contributions of Native Americans as part of American history. Contrary to mainstream Eurocentric narratives, indigeneity did not disappear with the founding of the United States. Instead, people like my great-grandfather applied their indigenous knowledge in a new way to create spaces for his people. Its story ultimately reflects the creative tactics our ancestors used to survive and the struggle for self-determination that Indigenous peoples still face today.

How do you decide which objects to photograph and how to construct each photograph?

At the start, I sifted through the hundreds of photographs of this trunk to reconstruct the different chapters of his life. As I began to interact with the images, I noticed that the photographs he left behind told of his life after boarding school. I discovered letters and diary entries that expressed the obstacles he faced as a Native American navigating a rapidly changing world in the early 1900s.

I felt that the intensity of the modernization of the time and the use of natural textural elements in the background conveyed the duality of my great-grandfather’s experience. It was also important for me to photograph this project in the South Bay area of â€‹â€‹Los Angeles, also known as Tongva Territory, where my great-grandfather spent his last days before moving into the Spirit World.

How would you say this was a personal project for you?

This project began as an investigation into my parent’s life and evolved into experiences of deep inner reflection and healing. I faced the violence and trauma my great-grandfather experienced at the time as an Anishinaabe forced to leave his ancestral lands due to federal assimilation policies. However, the contents of his trunk that he left behind embody a spirit of resistance through images of growth, change and joy. His efforts to reclaim his identity through the trauma he suffered are inspiring and reminds the importance of sovereignty through storytelling.

Tell me a bit about a thing or two that have surprised you since you started this process?

In order to better understand the impact my great-grandfather left on those close to him, I contacted several relatives about their memories of him. I was surprised to discover aspects of his personality through various family stories that are not conveyed in the content he left in the trunk. A relative said his exceptional hunting skills helped the family through the Great Depression.

Another relative described him as a deeply loving man who enjoyed being in the company of his family. I was also amazed at the creative ways my loved ones connected, despite our geographic distance, to share stories about my great-grandfather John B. McGillis. This project demonstrates the power of intergenerational storytelling and the ability of our ancestors to transcend place and time.

Special thanks to Kevin Locke, Sheridan MacKnight, Winona Flying Earth and Thelbert Milligan for contributing their knowledge of the life of John B. McGillis to this project.