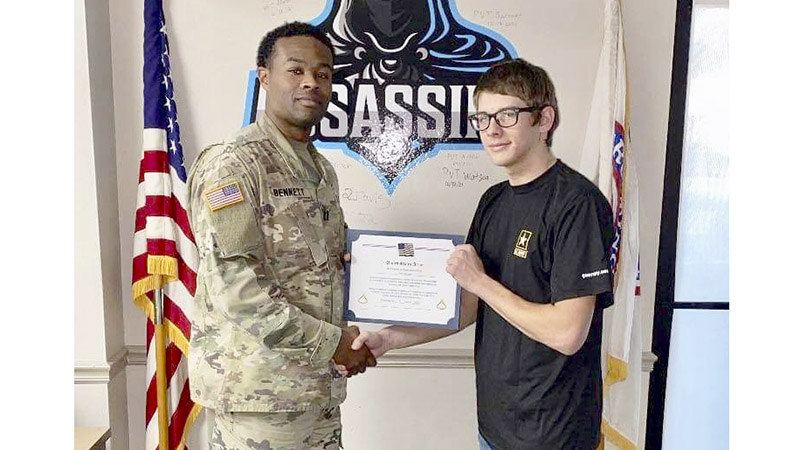 Timothy “TJ” Dewayne Hall Jr., a senior at Straughn High School, is thrilled to honor his father’s memory and follow in his family’s footsteps by joining the United States Army upon graduation.

“I was 16 when my father died a little over two years ago. He was the greatest spotlight of my life and also served for our country as a member of the United States Army. The military is the largest military branch and has the most job options. That’s what really hooked me into the military since I didn’t have to do what everyone else has to do,” Hall said.

He will graduate from SHS on Friday, May 27 and leave for basic training in Oklahoma on Monday, June 6.

“Future Soldier Hall is the type of young man the Army needs in our organization. He is patriotic, humble, and has the traits you look for in a leader. You can tell he proudly loves his country. It stems from his family members who served our nation and raised him with those values. I’m very interested to see where Future Soldier Hall will end up later in his military career. He is someone I want in my training, and I know he will serve our country superbly,” said U.S. Army Capt. Michael Bennett.

Hall hopes to become a combat medic in a Ranger regiment or serve as 18 Delta, who is a special forces medic.

“I’m going to go to Fort Sill and learn how to be a fire control specialist. I think serving is the least I can do for this country and I don’t see anything wrong with that. I’m excited to be able to do it and I can’t wait to apply to ranger school and eventually become a green beret,” he said.

Hall, originally from Opp, will join other members of his family who have served in the United States Armed Forces.

He thinks freedom is important when he serves in the US military. “Freedom in this country is important for anyone who lives in this country to believe what they want and to live in this great nation where they will not be judged. This is why I intend to wear the uniform and protect this right that every citizen of this country deserves,” he said.

His family’s military background on both sides inspired him.

“My sister Kristen and my brother-in-law, RJ Bowman, were the ones who really helped him make the decision to enlist. The majority of my family is on my side, especially my third oldest sister, Emily Hall. She still lives nearby and has stood by me the most of anyone.I want to thank my friend Justin Jordan for enlisting with me, all my family members who supported me in this decision, as well as Staff Sergeant Mitchell, Staff Sergeant Scholz, Staff Sergeant O and Captain Bennett.

He is the son of the late Tim Hall and grandson of Noah and Tina Blair. He has three sisters and two brothers-in-law: Courtney (Albert) Calderon, Kristen (RJ) Bowman and Emily Hall. Her aunt and uncle are Lisa and Chris Salter.

For more information, visit the Andalusian Army Recruiting Center at 226 East Three Notch Street or call the office at 334-427-1657.

“Timothy Hall (TJ) is the best future soldier at the Andalusian Army Recruitment Center. He strives to perpetuate the torch transmitted by his grandfather and his father. He is the most dedicated and hardworking future soldier I have met in my last three years as a recruiter. He serves with pride and brings great pride and honor to his school, his community, his country and his family. I look forward to watching TJ grow as a soldier and all of his future accomplishments,” said U.S. Army Staff Sergeant Breon Mitchell.

How to apply for a payday loan