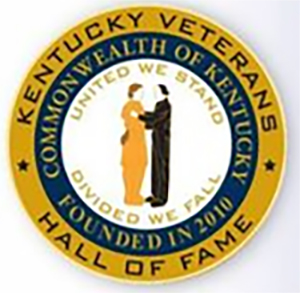 This summer, 29 military veterans from Kentucky will be inducted into the Kentucky Veterans Hall of Fame (KVHOF), selected for their extensive post-military community service.

The class will be introduced on July 28 in a ceremony featuring giant flags parachuted by the Team Fastrax professional skydiving team. Inductees will be honored Aug. 26 at a grand gala dinner, an evening of military camaraderie and patriotic music.

The official induction ceremony will take place on the morning of August 27. All events will take place at the Marriott Griffin Gate Resort & Spa in Lexington and are open to the public. Full details are available online at www.kyveterans.org.

“Many veterans continue to serve their branch, country and community through volunteerism. It is the goal of the Kentucky Veterans Hall of Fame to honor them,” said Terry Vannarsdale, KVHOF Nominating/Processing Director. “As we assessed the applications, it became clear that these applicants had a strong desire to help others. It is fair and responsible to recognize them for their extended service. »

HB Deatherage, Founder and Executive Director of KVHOF, said, “Veterans are sometimes taken for granted, and these events are a wonderful way to honor those who deserve recognition for serving the Commonwealth of Kentucky. This is the largest class we have selected.

The Class of 2022 inductees into the Kentucky Veterans Hall of Fame are:

Following the August 27 induction ceremony, an official Kentucky Veterans Hall of Fame plaque bearing the above names will join the prior class plaques permanently displayed in the first-floor lobby near the Secretary of State’s office in the State Capitol building in Frankfurt.

The names will eventually be added to a series of regional KVHOF monuments installed at various locations across Kentucky.

To date, more than 200 worthy veterans have been selected from 53 Kentucky counties, spanning multiple conflicts and eras since World War I, representing the Army, Navy, Air Force, Marines and Guard. coastal United States.

From the Kentucky Veterans Hall of Fame