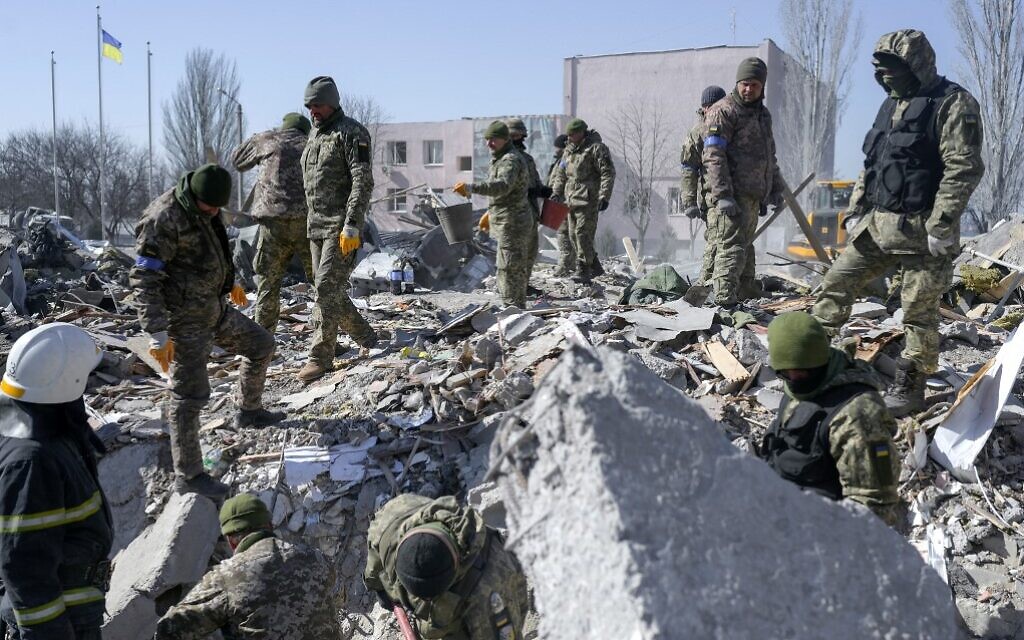 MYKOLAIV, Ukraine – Dozens of soldiers were killed when Russian troops shelled a Ukrainian military barracks in the southern city of Mykolaiv, witnesses told AFP on Saturday as a rescue operation was underway.

“No less than 200 soldiers were sleeping in the barracks” when Russian troops struck early Friday, a Ukrainian soldier on the ground, Maxim, 22, told AFP, without giving his last name.

“At least 50 bodies have been recovered, but we don’t know how many more are in the rubble,” he said.

Another soldier estimated that the shelling could have killed around 100 people.

The authorities have not yet published an official report.

The military installation north of the city was completely destroyed after being hit by several rockets on Friday morning.

Video shows rescuers and medics trying to save a little girl who was under rubble after a rocket attack on a military base in #Mykolaiv pic.twitter.com/uaGzuksIAi

“Yesterday the ‘orcs’ cowardly hit our sleeping soldiers with a rocket,” Vitaly Kim, head of the regional administration, said in a video on Saturday, using the Ukrainian nickname for Russian forces.

“A rescue operation is underway,” he added. He gave no further details, saying he expected to receive official information from the armed forces.

A Ukrainian soldier stands next to the rifles of dead and wounded soldiers, near the military school hit by Russian rockets the day before, in Mykolaiv, southern Ukraine, on March 19, 2022. (Bulent Kilic/AFP )

AFP journalists on the spot earlier in the day saw the bodies of three people, including a shredded corpse extracted from the rubble by rescuers.

A survivor was also evacuated.

Rescuers carry a Ukrainian soldier rescued after 30 hours from the debris of the military school hit by Russian rockets, in Mykolaiv, southern Ukraine, on March 19, 2022. (BULENT KILIC / AFP)

“We continue to count but it’s impossible to know given the state of the bodies,” a rescuer told AFP.

Mykolaiv Mayor Oleksandr Senkevych told local reporters that the city, which had a pre-war population of nearly half a million, had been hit by neighboring Kherson region, now under Russian control.

For days the Russians have bombarded Mykolaiv, which is on the way to the strategic port city of Odessa, about 130 kilometers (80 miles) along the Black Sea coast.

We tell a critical story

Israel is now a much bigger player on the world stage than its size suggests. As a diplomatic correspondent for The Times of Israel, I am well aware that Israel’s security, strategy and national interests are always under scrutiny and have serious implications.

It takes poise, determination, and knowledge to accurately convey the story of Israel, and I come to work every day aiming to do just that.

Financial support from readers like you allows me to travel to witness both the war (I have just returned from a report in Ukraine) and the signing of historic agreements. And it keeps The Times of Israel the place readers around the world turn to for accurate information about Israel’s relationship with the world.

If it’s important to you that independent, factual coverage of Israel’s role in the world exists and thrives, I urge you to support our work. Will you join the Times of Israel community today?

You are a dedicated reader

We’re really glad you read X Articles from The Times of Israel over the past month.

That’s why we started The Times of Israel ten years ago – to provide discerning readers like you with must-read coverage of Israel and the Jewish world.

So now we have a request. Unlike other media, we don’t have a paywall in place. But since the journalism we do is expensive, we invite readers to whom The Times of Israel has become important to support our work by joining The Times of Israel community.

For just $6 a month, you can help support our quality journalism while benefiting from The Times of Israel WITHOUT ADVERTISINGas well as access Exclusive content only available to members of the Times of Israel community.

Thanks,
David Horovitz, founding editor of The Times of Israel