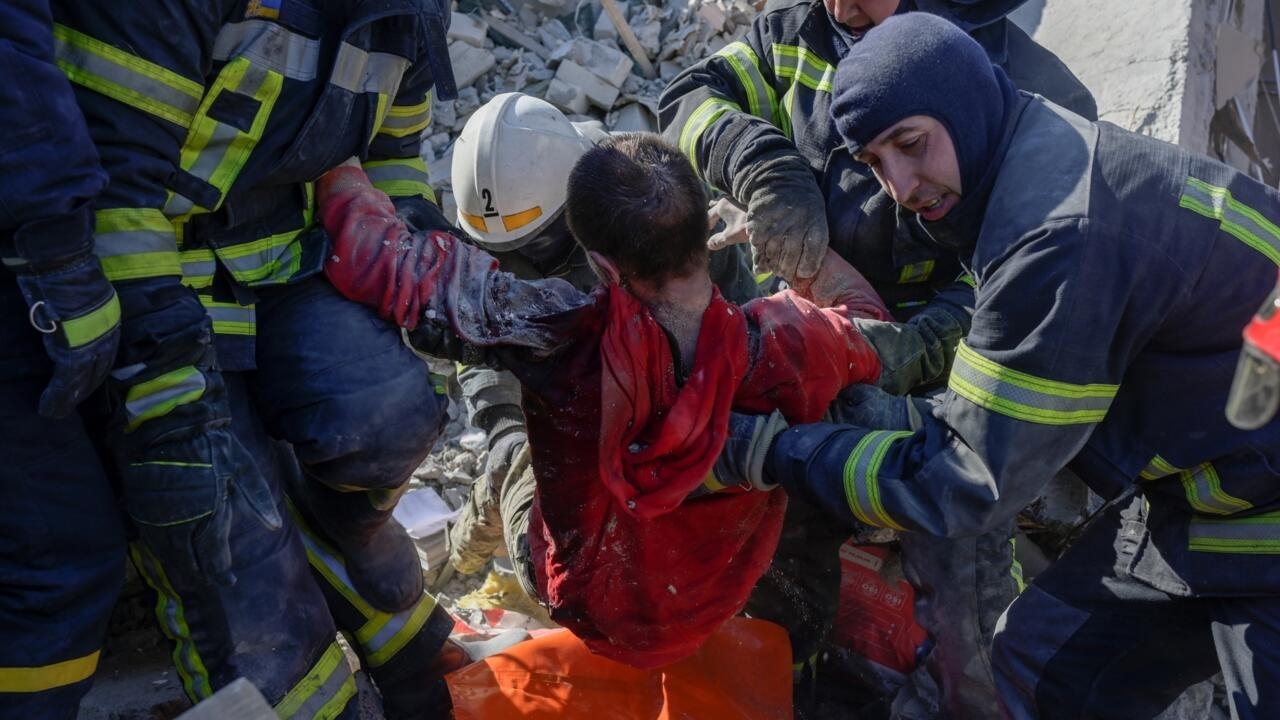 Mykolaiv (Ukraine) (AFP) – The soldier’s face is covered in dust that leaves only his blue eyes barely visible. But he is alive after the ruins of a Russian military strike on a barracks in Mykolaiv that left dozens dead in the southern Ukrainian city.

A journalist present at the scene heard noises coming from inside the rubble and called the rescuers, who moved piles of rubble with their bare hands for an hour before managing to extricate the man.

Despite his shock, he valiantly tried to talk to the stretcher-bearers as they led him away.

Witnesses to the attack told AFP that six rockets hit the site, which originally served as a young officers’ academy, around 6am on Friday.

“A huge explosion,” says a resident, Nikolai. The explosion reduced several buildings in the neighborhood to rubble.

“No less than 200 soldiers were sleeping in the barracks,” says Maxim, 22, who had been stationed nearby and watches with horror the extent of the destruction.

“At least 50 bodies have been removed but we don’t know how many are left under the rubble,” he said.

Another soldier, Yevgeny, claims that up to 100 people could have been killed, in an attack with no official report to date and the details of which remain unclear.

Ukrainian authorities say only that Mykolaiv, which they describe as a “shield” of the key strategic military port of Odessa, some 130 kilometers (85 miles) further west, is resisting Russian attacks and repelling onslaughts from invaders.

Kyiv authorities have been saying for several days that Russian forces have been pushed back to Kherson, another southern city further east and under Russian control.

Regardless, the Russian strikes, which have been hitting civilian targets as well as military installations for the past fortnight, continue to be relentless.

“We are not allowed to say anything because the rescue operation is not over and not all the families have been notified,” military spokeswoman Olga Malarchuk said, first in Ukrainian before switching to Russian.

Visibly moved, she continues: “We are not yet in a position to announce a toll and I cannot tell you how many soldiers were present.”

The Ukrainian presidency does not answer questions about the attack.

“Yesterday the orcs cowardly hit our sleeping soldiers with a rocket,” Vitaly Kim, head of the regional administration, said in a video, using the Ukrainian nickname for Russian forces.

He added that he was awaiting official information from the armed forces.

Rescuers and firefighters have been working tirelessly at the site razed since Friday, accompanied by the haunting sound of an excavator clearing the huge pile of stones, concrete and twisted metal rods.

A blood-covered arm and a piece of human torso are placed on a tarp by rescuers.

Further on, three bodies, including one covered with a white sheet, were removed from the rubble.

The military bags and bulletproof vests of the victims were gathered in a corner.

A few meters from the destroyed barracks, another building, less damaged, still houses a dormitory and some offices.

All the windows have been blown out, but a small painting of a religious icon and pictures of soldiers still hang on the wall.

A gray stone statue of a sailor leaning on a rifle, ships in the background, remains standing amidst the desolate scene.

Probably intended to be placed at the entrance to the bombarded barracks, a poem is visible there.

His first words read: “Fight! You will win”.