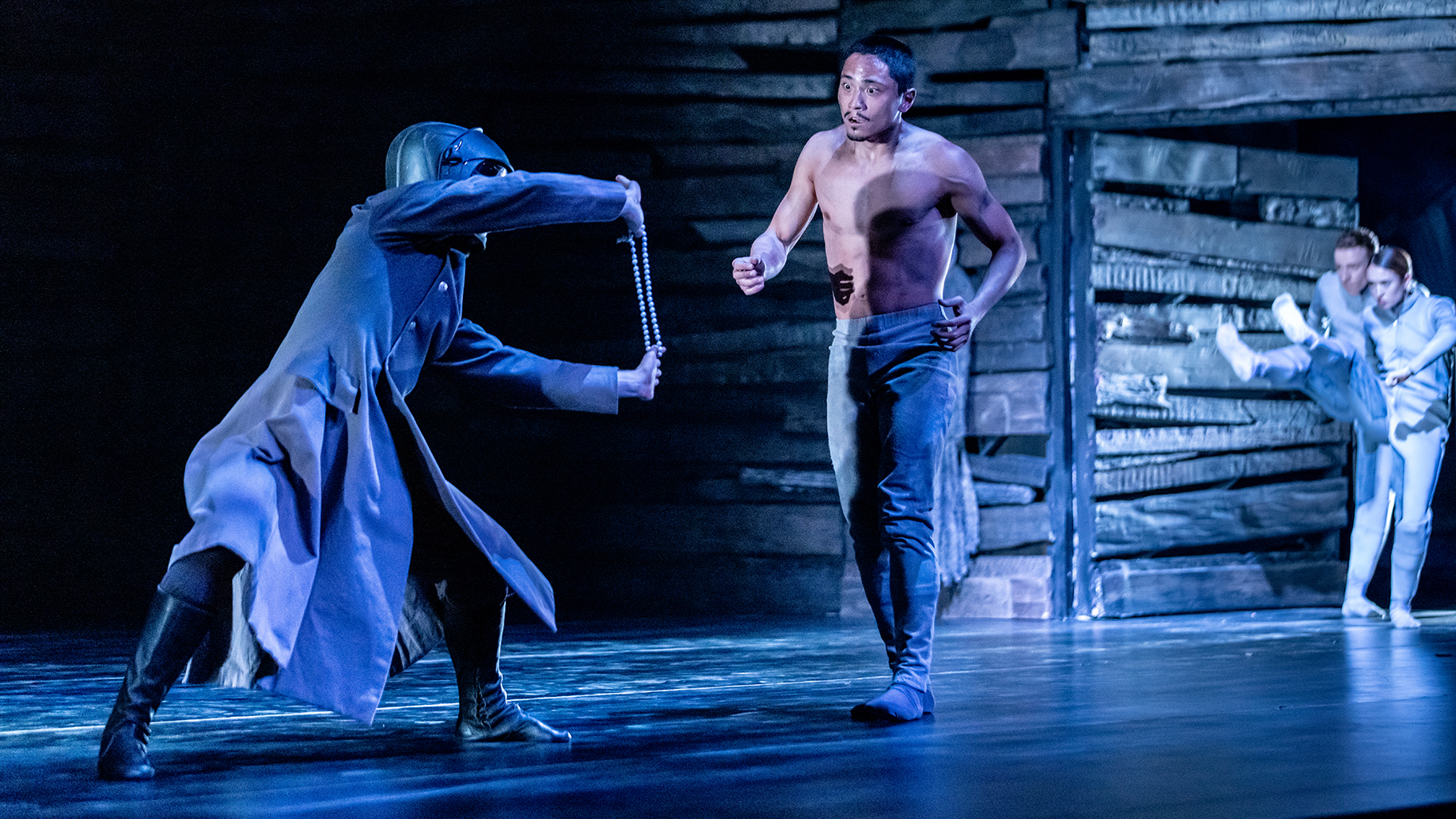 Victor Prigent and Jeffrey Cirio in “Creature” by Akram Khan. (Courtesy of the English National Ballet)

In 2019, the English National Ballet’s stunning production of Akram Khan’s ‘Giselle’, a reimagined version of the ballet classic, arrived at the Harris Theater for Music and Dance and was a huge hit. The company was then scheduled to return to Chicago in the spring of 2020 to perform Khan’s “Creature,” but it was a visit that had to be canceled due to the outbreak of COVID.

Last week, in chilling and prescient fashion, a rescheduled visit from “Creature” arrived on the Harris Stage, and it couldn’t have been timed better. To watch what Khan described as a work created to “explore our very destructive nature of wanting to control everything” felt more chilling and prescient than ever as Russia began its brutal and menacing attack on Ukraine.

With its echoes of Georg Buchner’s play “Woyzeck” and the Alban Berg opera it inspired (the story of a naïve soldier physically and emotionally tortured and in pursuit of love) , plus a vague allusion to Mary Shelley’s “Frankenstein”. and a strong sequence of sci-fi gloom, “Creatures” tells the deeply disturbing story of a young man and woman whose lives are destroyed by the cold, manic machinations of an army major and of its collaborators.

The story (for which Ruth Little served as playwright) is set in a giant, rotting wooden barracks in a desolate part of the Arctic, and it goes like this: The shy, innocent guy known only as Creature (in a spellbinding spin by Jeffrey Cirio), is deeply in love with Marie, a young maid (Fernanda Oliveira, both delicate and scared, but fierce in spirit). But he is forced into a terrible experiment of almost inhuman endurance by an army major (James Streeter, dressed in an imperial-style coat, which suggests all the arrogance and chilling cruelty of a Putin-like figure ), who wants Mary for himself. The Major is aided and abetted by the Doctor (Stina Quagebeur, a slender blonde), who will only bid to inspire his love. And his sidekick, the Captain (Henry Dowden), clearly takes the order to keep his position.

Major’s ‘experiment’ on the creature is accompanied by a sardonic echo of man’s first adventures in space, with a recording of President Nixon’s message to Neil Armstrong announcing man’s first steps on the moon. And that sounds like Khan’s way of suggesting that we may have gone too far. (Ironically enough, this came just as Russia was raising questions about its joint work with the United States on the International Space Station.)

But back to the ballet. It turns out that the Creature survives his terrible ordeal and is still madly in love with Mary. But once again the Major regains control and pursues Marie against her will, and until a tragic end. The Creature is powerless.

Love and innocence, power and cruelty, the quest for mass control and human destruction are part of the ballet mix. And with its massive setting – a fortress-like bunker with heavy wooden walls that break loose and fall to the ground – it even suggested the news photos of destroyed buildings in the Ukrainian city of Kiev. (The large-scale set is the work of Tim Yip, with lighting by Michael Hulls.)

Khan’s choreography (rooted in contemporary dance as well as classical kathak, an Indian storytelling dance form that suggests his Bangladeshi heritage), is fluid and compulsively repetitive, and was performed to stunning effect by the dancers of the English National Ballet. Cirio’s remarkable plasticity and smooth flow, along with his formidable dramatic skills and sheer endurance, were hugely impressive.

Oliveira beautifully captured Maria’s fear, desire, and determination as she suffered for the creature, but was reduced to cleaning the floor and fending off the Major’s unwanted (and ultimately violent) advances. The supporting dancers, dressed in gray fatigues, formed an ideal chorus.

The ballet’s fiendishly difficult score and sound design were done by Vincenzo Lamagna and ideally set the mood for “Creature”, emphasizing Khan’s repetitive motion and the ballet’s dystopian coldness. It sounded almost electronic but wasn’t. In fact, it was brilliantly performed by the musicians of the Chicago Philharmonic, and conducted by Gavin Sutherland.

“Creature” is a fascinating work, ideally executed. I left the theater in awe of his artistry, but I can’t say I left full of hope for the future of humanity.