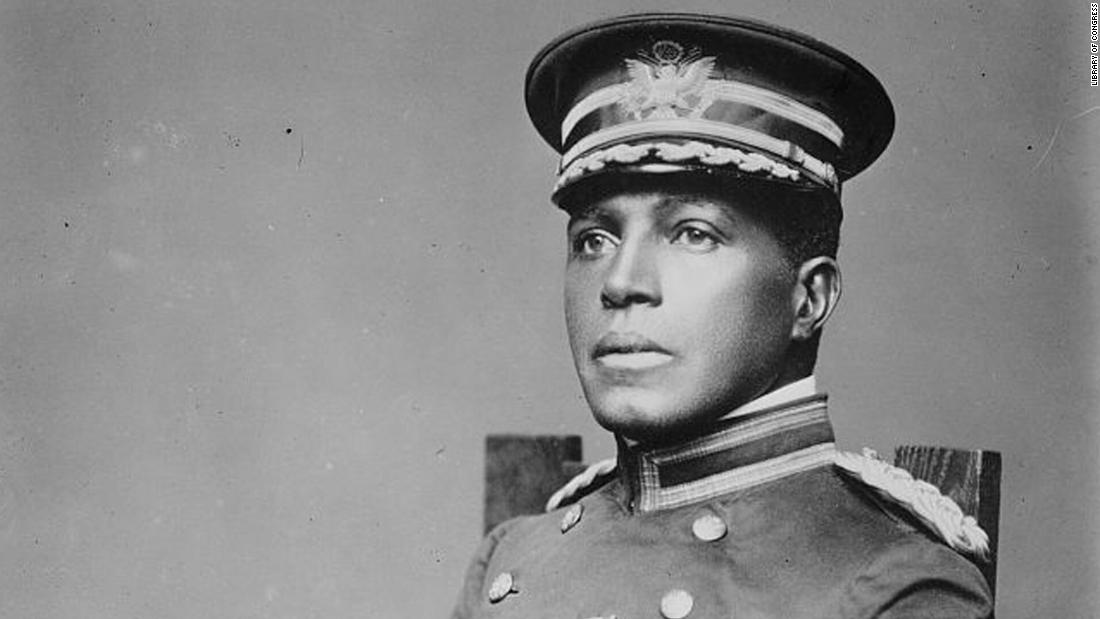 Charles Young: A century after his death, the first black colonel in the US Army is promoted to general

Young’s promotion retroactively makes him the first recognized Black American with that rank, the military said.

The honorary designation, after years of efforts to promote him posthumously, was the subject of a formal promotion ceremony at the United States Military Academy at West Point on Friday.

After Young was passed over for a promotion before his death in 1922, a black service member would not advance to general officer rank in the army until Benjamin Davis Sr. was promoted brigadier general in 1940.

“Young’s promotion today to brigadier general has been long delayed, but fortunately for all of us, it is no longer denied,” Army Undersecretary Gabe Camarillo said Friday at the ceremony. . Camarillo also praised Young as a “model leader” and called his legacy “downright inspiring.”

Members of the de Young family were present at the ceremony, including his great-niece Renotta Young, who received Young’s posthumous honorary promotion order and certificate, a gold-plated leather belt worn by general officers, and a general officer’s flag one star.

“Charles Young resisted social isolation not only at West Point, but throughout his military career and in national parks,” Renotta Young recalled in a speech Friday, adding that despite the difficulties Young faced, he “had managed to like” the American experience.

“Although he felt the acute sting of discriminatory treatment from his classmates here at West Point, at various points in his career from his superiors as well, he did not relegate the whole ‘White America on the racist side of the ledger,’ she added.

Renotta Young told CNN it took half a century for her uncle to be promoted to brigadier general, an effort largely driven by her family and the Omega Psi Phi Fraternity, Inc. of which Young is an honorary member.

“Even though it was long overdue, this was the moment it happened, and I think it’s a good time for people to communicate the legacy of his life and what he did. for our country,” she told CNN.

Born in 1864 in May’s Lick, Kentucky, to slave parents, Young graduated high school with honors and became an elementary school teacher for two years. After his father’s encouragement, Young took the West Point entrance exams but was not selected to attend despite having the second-highest score. It was not until an applicant dropped out the following year that Young received his letter of acceptance and became the academy’s ninth black entrant in 1884. While at the academy, he faced racism from instructors and other cadets, but persevered. In 1889, he became the third black graduate of the academy after Henry Ossian Pinball and John Hanks Alexander.
After graduating from the academy, it took three months before he received an assignment because at the time, black officers were not allowed to command white troops, according to his National Park Service biography. . He was commissioned a second lieutenant and assigned to the Ninth Cavalry in Fort Robinson, Nebraska, and Fort Duchesne, Utah, a regiment of the “Buffalo Soldiers”. the Buffalo Soldiers were regiments of black soldiers who played a key role in American western expansion and were initially commanded by white officers. They were also among the first national park rangers and protected the parks from poachers.

Young received additional promotions during his military career, including major in 1912 and lieutenant colonel in 1916, according to the NPS. He retired from medical treatment in July 1917 and was promoted to colonel, the first black man to reach that rank.

At the time, as he wrote to his longtime friend and civil rights activist WEB DuBois, he was skeptical of the reasoning for medical retirement, as he insisted he was in good health and wanted to continue active duty.
He was later recalled to help train black soldiers in World War I and in 1920 Young was sent back as a military attaché to Liberia. While on a research expedition in Nigeria, Young fell ill and died on January 8, 1922. After his death, his body was repatriated to the United States and buried in Arlington National Cemetery.
Young’s legacy has grown in the century since his death. The Charles Young Buffalo Soldiers National Monument was established in 2013 in Wilberforce, Ohio, and in February 2020 Kentucky Governor Andy Beshear, a Democrat, promoted posthumously Young to Brigadier General in the Kentucky National Guard and sent a letter to President Joe Biden asking him to recognize Young with promotion to the federal level. In November 2021, Undersecretary of Defense Gilbert Cisnero Jr. informed the House and Senate Armed Services Committees that he had approved Young’s honorary promotion.

It was an attempt to remedy a long-standing stain on U.S. military history and honor a man who, as DuBois recalled, was a “triumph of tragedy.”

“No one ever knew the truth about the hell he went through at West Point,” DuBois written in an edition of the NAACP publication “The Crisis” a month after Young’s death.

“He was one of the few men I know who literally turned the other cheek with Jesus Christ,” DuBois wrote. “He was laughed at for it and his own people reprimanded him bitterly, but he persisted. When a Southern white pygmy at West Point protested being taken from a dish past d “First to Young, Young passed it first to him and then to himself. When lower-ranking officers refused to salute a Negro, he would salute them. He rarely loses his temper, rarely complains.”

CNN’s Eva McKend and Veronica Stracqualursi contributed to this report.