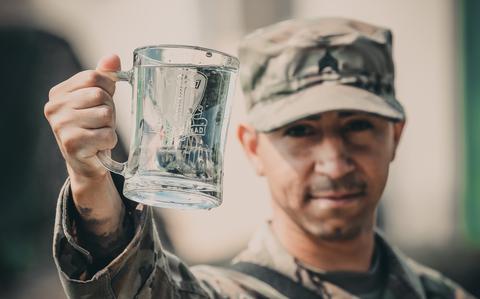 sergeant. Daniel Baudoin, a water purification specialist with the 240th Composite Supply Company in Baumholder, Germany, shows off freshly purified water he and his team produced during an exercise in Poland on June 2, 2018. German officials have asked residents of the Birkenfeld district, which includes Baumholder, to boil tap water due to bacterial contamination detected ahead of the Easter weekend. (Aaron Good/US Army)

KAISERSLAUTERN, Germany — Residents of the Baumholder area are being urged to boil their tap water after high levels of a bacteria that is a leading cause of foodborne illness were discovered.

The boil water advisory was expanded on Friday to cover much of the Birkenfeld district, where many US military personnel live.

Officials initially thought only a limited area would be affected after the bacteria was first detected at a childcare center in Sien, the Nahe Zeitung reported over the weekend.

But other tests showed that the presence of the germs was more widespread. The bacteria in the samples, Clostridium perfringens, can produce a toxin that causes diarrhea, according to the US Centers for Disease Control and Prevention.

People in affected areas should boil tap water before drinking it or using it for domestic purposes, such as cooking and brushing teeth. The boiling took place in Baumholder, in the urban areas of Idar-Oberstein and in more than 34 towns and villages in the districts of Birkenfeld and Herrstein-Rhaunen.

Water from taps at Baumholder facilities, including Smith Barracks, Wetzel Kaserne and Clinic Kaserne, is independently treated and safe to use, a post on the official Military Community Facebook page said Saturday. Baumholder.

The army, which maintains a major training ground in the area, operates its own water supply and disinfects the water with chlorine. German municipalities generally do not chlorinate drinking water.

Water supplies to work centers and base residents are unaffected, U.S. Army Garrison Rheinland-Pfalz told Stars and Stripes on Monday.

Baumholder Military Community is a satellite installation of the U.S. Army Garrison Rheinland-Pfalz. In 2016, contamination with E. coli bacteria triggered a three-day boil water advisory in the region.

Monday afternoon, it was unclear how long the boil water advisory will remain in effect. District officials were unavailable as local offices remained closed for national Easter holiday celebrations.