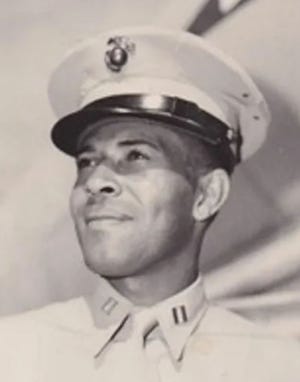 During the month of August, the 36th Lights for Peace Flag will fly at Fort Taber – Fort Rodman Military Museum honors the memory of Dr. Herbert R. Waters, a US Marine Corps Colonel who died on August 4 last year. 2021, at the age of 90.

Waters was born October 8, 1930, the son of the late Herbert R. Waters, Sr., and the late Jane C. (Joseph) Waters. He grew up in North New Bedford on Hillman St. and attended New Bedford High School where he excelled in the ROTC program. After graduating from high school in 1948, he attended Providence College where he ran track and cross country. After earning a bachelor’s degree from Providence College in 1953, he earned a commission in the United States Marine Corps.

According to his obituary, LT Waters, also known as “Bert,” became just the 10th black officer in US Marine Corps history. He served in the Korean War for 14 months and remained in the Marine Reserves, earning promotions before his peers, eventually reaching the rank of Colonel. His main duty station was at Naval Air Station South Weymouth, Massachusetts, where he became the first African-American commanding officer of Mass 6 Marine Air Support Squadron.

While serving in the Marine Corps Reserves, Waters continued his education, earning a master’s degree from Bridgewater State College and a doctorate from Nova University. He began working for the New Bedford public school system and became a leading figure in education for the next 32 years, the majority of his time as principal of Sgt. William H. Carney Academy.

It was here that Dr. Waters left an indelible mark on his community and helped shape education, not just in New Bedford but for the entire state. According to his obituary, “Through strong leadership, personal responsibility and by introducing a pioneering multicultural curriculum and celebrating diversity, Sgt. William H. Carney Academy quickly became the crown jewel of the entire school district. Presidential candidate and civil rights icon Jesse Jackson, Governor Michael Dukakis, and many other dignitaries regularly visited Carney as educators across the state began to model Dr. Water’s innovative approach to college leadership.

A Standard-Times article written last year, after Water’s death, included quotes from many people who knew Dr Waters and recalled the impact he had on Carney staff and students. SPNB Deputy Superintendent Karen Treadup wrote: “The man was great. Carney Academy benefited so much from his leadership, which was rooted in self-discipline, and which he passed on by example to his students. As principal, he engaged students with a deep sense of caring and first-hand knowledge of the challenges many of them faced.

Mayor Jon Mitchel wrote in a statement: ‘As distinguished as his military career was, he is perhaps best known as the longtime principal of Carney Academy, where he developed a national reputation in education. Urban for setting high standards for personal and academic responsibility. performance.”

After Waters retired as principal of Carney Academy, he opened Carney Daycare, providing a safe learning environment for children in kindergarten through sixth grade.

Waters was extremely proud of his Wampanoag heritage and was a fellow of the Massachusetts Center for Native American Awareness. He was known as the “Black Eagle” and was a highly respected elder within the Native American community. He often traveled as a representative of the Wampanoag Nation to powwows across the country, including the Gathering of Nations in New Mexico, the Crow Fair in Montana, the Seminole Powwow in Florida, the “Schemitzun” in Connecticut, and his beloved Mashpee Wampanoag Powwow in Massachusetts.

He was also an avid runner and pilot. Waters has participated in biathlons, half marathons, countless road races and completed 27 marathons. He also enjoyed flying his personal “Bulldog” plane, logging several hundred hours, often taking friends and family in his Piper Cherokee 140.

Dr. Waters has also been actively involved in the Cape Verdean community. Former New Bedford Mayor Scott Lang said, “It fueled the whole idea of ​​driving young people to the highest level of achievement, proving Waters is a role model in all aspects of the community.

“Dad was a true patriot who loved this country, the town of New Bedford, and his friends and family,” family members remember him. Mayor Jon Mitchell wrote in a statement: “Accomplished aviator, promoter of Wampanoag culture and marathon runner were among the many roles he incorporated in one way or another into his extraordinarily busy life. His commitment to excellence in all that he undertook and his unwavering devotion to the Nation and the City will continue to inspire those who had the good fortune to know him.