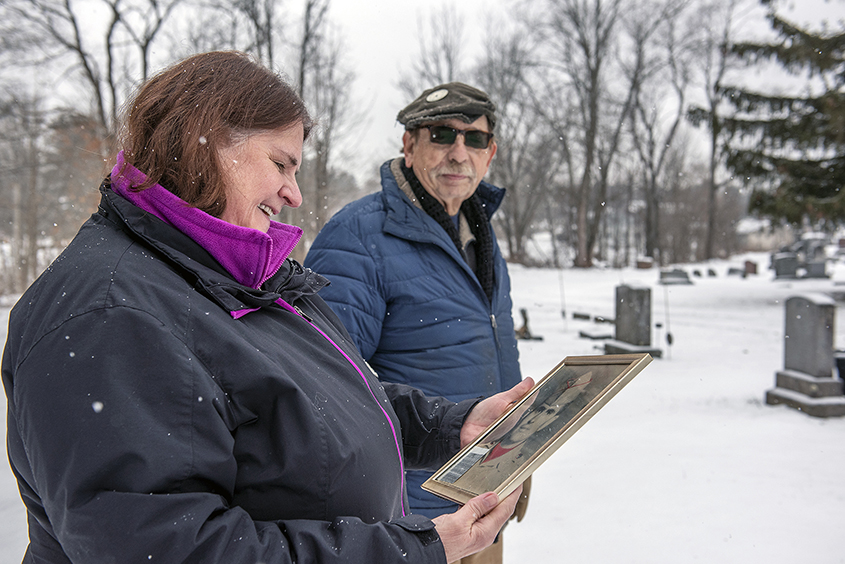 Since April 9, 2014, Howard Forgette rests in an unmarked grave.

The US Army veteran, who served in Korea from 1956 to 1958, is buried next to his wife, Nancy, in Perth Cemetery, which dates to 1807. But while Nancy Forgette, who died in October 2010, has a headstone marking his burial site, Howard Forgette lies under nothing but grass.

This fact has weighed on his daughter Jane Konik of Perth since her father died at the age of 79. Konik, who lost her factory job in 2009 and has since worked cleaning homes, said money was tight, and she and her three younger brothers couldn’t afford a headstone , which can range from several hundred dollars to over $1,000.

“Financially, we couldn’t. So I kind of stopped there and felt bad,” Konik said. “My brothers and I talked, and they said we didn’t have the money to do it either. So we just didn’t. It didn’t happen. »

She said she thinks about it almost every day.

Konik said Forgette was a caring father, an outgoing man who enjoyed family reunions and neighborhood gatherings. In fine weather, he would come home from his job as a welder at General Electric and take care of the garden, plowing or picking up stones.

“He was just a good guy. He would do anything for anyone,” Konik said.

Forgette hasn’t spoken much about his time on the service. But he had quite a few pictures of him and his army buddies. Konik still has the photos, reminders of his father’s past.

All of this entered Konik’s thoughts on a regular basis, making it all the more unbearable that she and her family were unable to properly honor their father, a man who had dutifully served his country in the engineering department of the army after the Korean War.

Then, one day last fall, Konik received a message on Facebook. It was from Peter Betz, a Perth city councilor who is also president of the Perth Center Cemetery Association.

Betz said he and volunteers cleared the cemetery grounds in late summer when one of the cemetery association members mentioned she knew the unmarked spot where Forgette was buried.

Betz, a town historian and son of a veteran, knew immediately that Forgette was eligible to receive a headstone.

According to the Veterans Benefits Administration, “The Department of Veterans Affairs [VA] provides upon request, at no cost to the applicant, a headstone or government marker for the unmarked grave of any deceased eligible veteran at any cemetery in the world, regardless of date of death.

All Betz needed was a death certificate and discharge papers.

Knowing nothing but Forgette’s name, Betz said he did a little investigating online and eventually found his way to Konik, prompting him to send the Facebook message.

“I didn’t know what to think at first,” Konik said, “but I was really excited.”

The two met at a Stewart store in late October. Now that Betz had a copy of the birth certificate, he worked with former director of the Fulton County Veterans Services Agency, Dan Engel, to track down the discharge papers and order the headstone.

The part arrived at Betz earlier this month.

“I’m not a veteran, but I’m aware of veterans because my dad was a veteran,” Betz said. “I think everyone should have a rock, and I think veterans deserve it more than anyone. They have to be remembered as veterans and as human beings because they are more than that when they become veterans. So I was very happy that we could do that.

Konik said she was amazed at the quality of the bronze tombstone.

“I was a bit shocked. I didn’t expect something that big. I just expected a small plaque. I am so happy,” she said. “It’s something that should have been done a long time ago, but I never knew who to contact.”

In the spring, they will place the stone in the cemetery above Forgette, laying it at an angle on a cement base so that rainwater is washed away and tall grass does not cover the inscriptions.

“My father would be happy. He would be really happy. He really would, to see that he was getting something as meaningful as this,” Konik said.

More from The Daily Gazette:

Holocaust survivors: ‘We never dreamed of hugging our mother again’

Did the teacher create a fake Facebook page? | School News