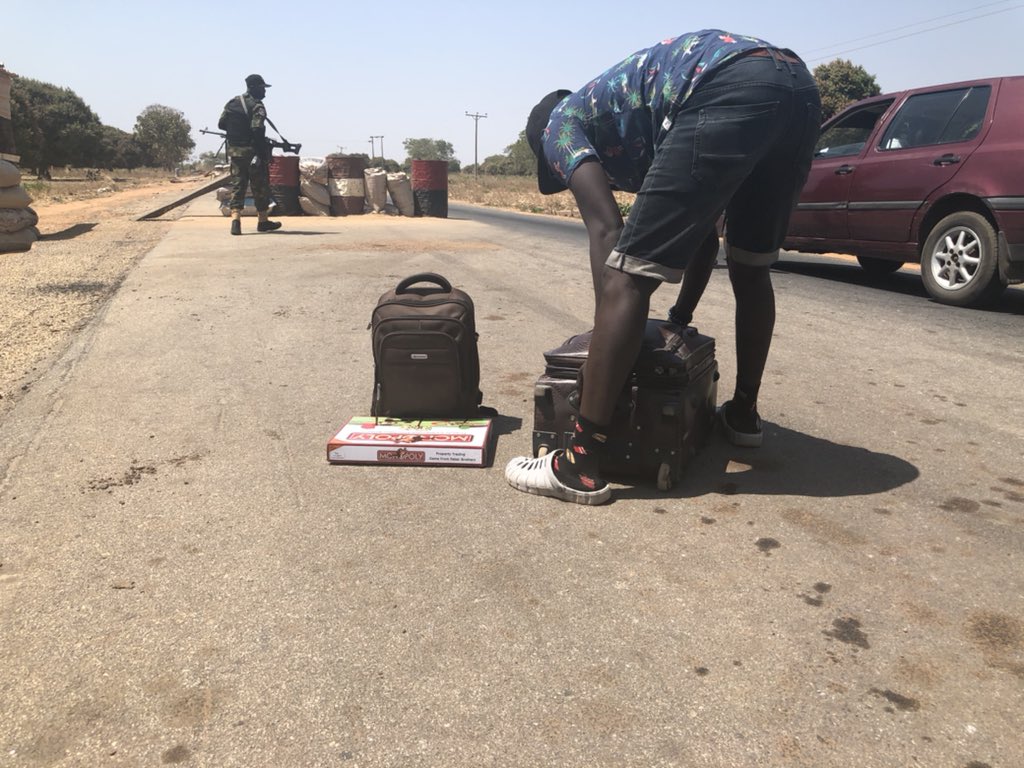 A young Nigerian has told how Nigerian army men stopped him and his friends on the road to cut his hair with scissors in Kaduna State and threatened to shoot him, reunited WITHIN NIGERIA.

The young man, identified simply as Freeze, took to social media with the handle @its_freezle, to recount how soldiers threatened to shoot him for not agreeing to go and cut his hair.

According to him, while traveling to Jos from Kaduna with his friends, he passed several checkpoints until they arrived at “Kurmin Idon” where they were arrested. The incident happened around 1:20 p.m. Thursday.

In his Twitter narration, he said: “Me, @pdshugar and @Kuturanki were coming to Jos from #Kaduna, we passed several checkpoints but on arriving at a checkpoint at ‘KURMIN IDON’, a military man told us all asked to get down , he told all my friends to take off their hats and i was the only one with a lot of hair so he insulted me and called me irresponsible because i was not low cut. Comparing me to my friends. He went further saying that I should go to a nearby barbershop to cut my hair or else he won’t let us go, which I wasn’t ready to make.

The young man said another soldier tried to shoot him for refusing to go and get his hair cut at a nearby salon while another wanted to hit him with his gun.

“So he asked his other colleague to cut my hair with scissors, I backed off, immediately, the other soldier cocked his gun to shoot me, and the other tried to hit me with his head of his rifle. So I stood up and the guy put the scissors in my hair,” he said.

He lamented the inhumane action inflicted on him by Nigerian army men who are supposed to protect the life and property of the citizens adding that they are abusing his parents out of irresponsibility.

He said, “I was truly pained not just because of my hair but because of my despair and what our #NigerianMilitary has become. The soldier who tried to shoot me kept insulting me and even said that my parents must be useless to allow me to move around with my hairstyle.

Freeze lamented how demoralized and helpless he was, pointing out that there was nothing he and his friends could do because he was insecure about his life.

“At the time, I thought of a thousand and one things to do, but I didn’t do anything because I wasn’t sure about my life. I mourned the whole trip to Jos,” he added.

This has drawn reactions and emotions from Nigerians who are calling on the Nigerian military to investigate the incident and punish the officers for demoralizing a citizen.

An expert who writes on military and security issues, Deji Adesogan, popularly known as Uncle Deji, while sympathetic, asked the victim to file a complaint at the Kaduna Civil-Military Office with the promise to offer help.

In his tweet, he said, “I really sympathize with you guys. Please call and submit your complaints via 193 and 08103311716 (1 Div Civil-Military Complaint line). Additionally, you can visit the civil-military office at 1Div Kaduna HQ. My DM is also open for further assistance for FREE.

Also, the popular activist, Rinu Oduala, also tweeted to deplore the mistreatment inflicted on the young man by the soldiers attached to the Kurmin Idon checkpoint.

“It’s so heartbreaking. I’m so sorry you went through this. A reflection of the state,” she said.

Mr. Festus Ogun, a human rights lawyer who also followed the story, also blamed the soldiers for basing such punishment on law-abiding Nigerians.

He said, “Imagine the torture and the gross level of inhuman treatment. Nigeria seems to be a nightmare for law-abiding citizens.

Many others also shared that this is not the first time that Nigerian army men have asked citizens to go and cut their hair because they feel it is an act of irresponsibility while cutting their hair with sharp objects. However, they called on the authorities concerned to remedy this “unprofessional” act.

Uncle Deji, who has been following the incident, revealed that “The Nigerian Army yesterday withdrew soldiers involved in an alleged human rights abuse at the Kurmin IDON military checkpoint at Kajuru LGA in Kaduna. The soldiers were withdrawn to Kachia military barracks for immediate disciplinary action.

At the time of writing, there is no statement from the Nigerian military on the actions of the soldiers.

Can you get a payday loan with a credit score of 550?