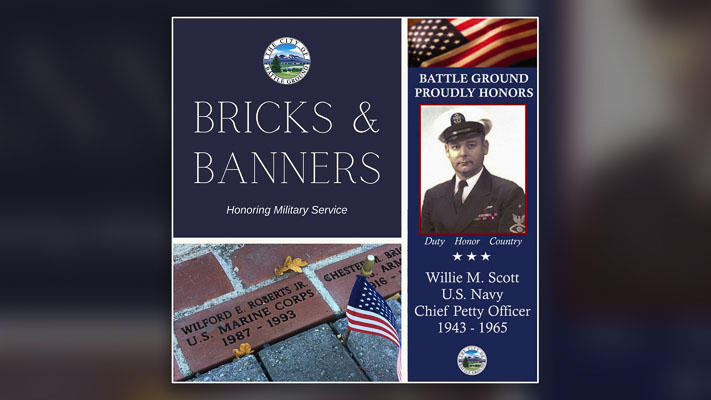 The City of Battle Ground’s Bricks & Banners program gives members of the community the opportunity to publicly recognize and honor an individual’s military service.

Those wishing to honor and recognize an individual’s military service through the City of Battle Ground’s Bricks and Banners program will want to be aware as the deadline approaches. For the installation of a commemorative brick at the Veterans Monument or for the display of a military banner on Main Street in 2022, orders must be placed before March 1st.

The City of Battle Ground’s Bricks & Banners program gives members of the community the opportunity to publicly recognize and honor an individual’s military service.

Custom memorial bricks can be purchased for placement at the Battle Ground Veterans Memorial to honor any American veteran. Each brick displays the veteran’s name, branch of service and dates of service. The bricks are etched and installed each year in time for Memorial Day. The cost of a custom brick is $250. Proceeds from brick sales support the ongoing maintenance of the Battle Ground Veterans Memorial.

Military banners to display along the main street of Battle Ground can be purchased to honor veterans, active duty personnel and those entering the military with a commitment to serve. Each personalized banner features a recipient’s photo, name, branch of service, rank and years of service. The city will install and display banners along Main Street during May — Military Appreciation Month — through the third week of June. The cost of a custom banner is $150.00 and includes installation for display on Main Street in the first year of purchase.

The gift of a memorial brick or military banner is a meaningful and lasting way to honor the military service of a loved one or friend. Purchase can be made at any time of the year, however, orders must be placed no later than March 1 for the same year’s installation or exhibit.

Detailed information about the Bricks & Banners program is available online or by contacting the city’s Parks and Recreation office at (360) 342-5380.

Information provided by the City of Battle Ground.