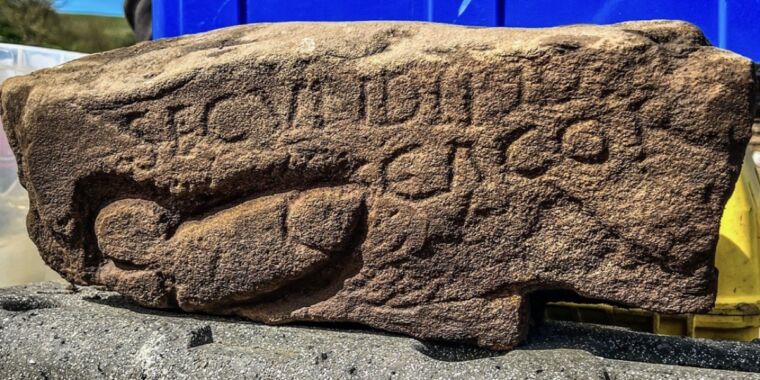 Archaeologists excavating the remains of a Roman auxiliary fort in the UK have recently made a startling and rather hilarious discovery: a small stone carved with the unmistakable image of a penis – essentially an ancient Roman d**k photo, accompanied a rude insulting message directed at someone the sculptor obviously didn’t like.

The Vindolanda site is located south of the defensive fortification known as Hadrian’s Wall. An antiquarian named William Camden recorded the existence of the ruins in a 1586 treatise. Over the next 200 years many people visited the site, discovering a military bathhouse in 1702 and an altar in 1715. Reverend Anthony Hedley began excavating the site in 1814, but died before he had a chance to record what he found for posterity. Another altar found in 1914 confirmed that the fort was called Vindolanda.

Serious archaeological excavations at the site began in the 1930s under the direction of Eric Birley, whose sons and grandson have continued the work after his death to the present day. The oxygen-depriving conditions of the deposits (some of which extend six meters or 19 feet into the ground) mean that the artifacts recovered are remarkably well preserved. These include wooden writing tablets and more than 100 boxwood combs, which would have disintegrated long ago in more oxygen-rich conditions.

The site is best known for the so-called Vindolanda Tablets, among the oldest surviving manuscript records in the UK. Discovered in 1973, they are thin sheets of wood, the size of a postcard, with text written in carbon-based ink. Most of the documents are official military communications and personal messages from soldiers in garrison to their families, revealing many details of life at the fort.

For example, a tablet is a letter from a Roman cavalry officer named Masculus to a prefect requesting that more beer be sent to the garrison. (An army marches on its stomach.) By far the most famous is tablet 291, written around 100 CE by the wife of a commander of a nearby fort named Claudia Severa. It was addressed to Sulpicia Lepidina inviting her to a birthday party and represents one of the earliest known examples of a woman writing in Latin.

Among the many other interesting discoveries: a bronze and silver fibula (a brooch or pin to fasten clothes) in 2006; the remains of a female child between 8 and 10 years old, found in a shallow grave in a barracks in 2010; a wooden toilet seat unearthed in 2014; and two Roman boxing gloves (unmatched) discovered in 2017, similar to modern full-handed boxing gloves, except these date back to 120 CE.

Regarding this latest discovery, one of the volunteers working on the excavation was a retired biochemist from South Wales named Dylan Herbert, who initially thought of the stone as just a piece of rubble. But when he turned it over, he noticed clear letters and realized that it was far from ordinary. “It wasn’t until I cleared the mud that I realized the full extent of what I had discovered, and I was absolutely thrilled,” Herbert said.

The stone is quite small, measuring 40 cm wide by 15 cm high (15 inches by 6 inches). Experts in Roman epigraphy have recognized the lettering as a mutilated version of Cacator Secundinuswhich translates to (ahem) “Secundinus, the shit”. The image of the penis only added insult to injury – a clever subversion of the traditional interpretation of a phallus as a positive symbol of fertility. The Vindolanda site now has 13 phallic carvings, more than those discovered at any other excavation site along Hadrian’s Wall.

“The recovery of an inscription, a direct message from the past, is always a big event on a Roman dig, but this one really raised our eyebrows when we deciphered the message on the stone,” said Andrew Birley, director digs and CEO. of the Vindolanda Trust. “Its author clearly had a big problem with Secundinus and was confident enough to publicly announce his thoughts on a stone. I have no doubt Secundinus would have been less than amused to see this when he wandered around the site more 1700 years old.”

Taste of Life: When Poona Cantonment Was One of the Most Hygienic Stations in the…