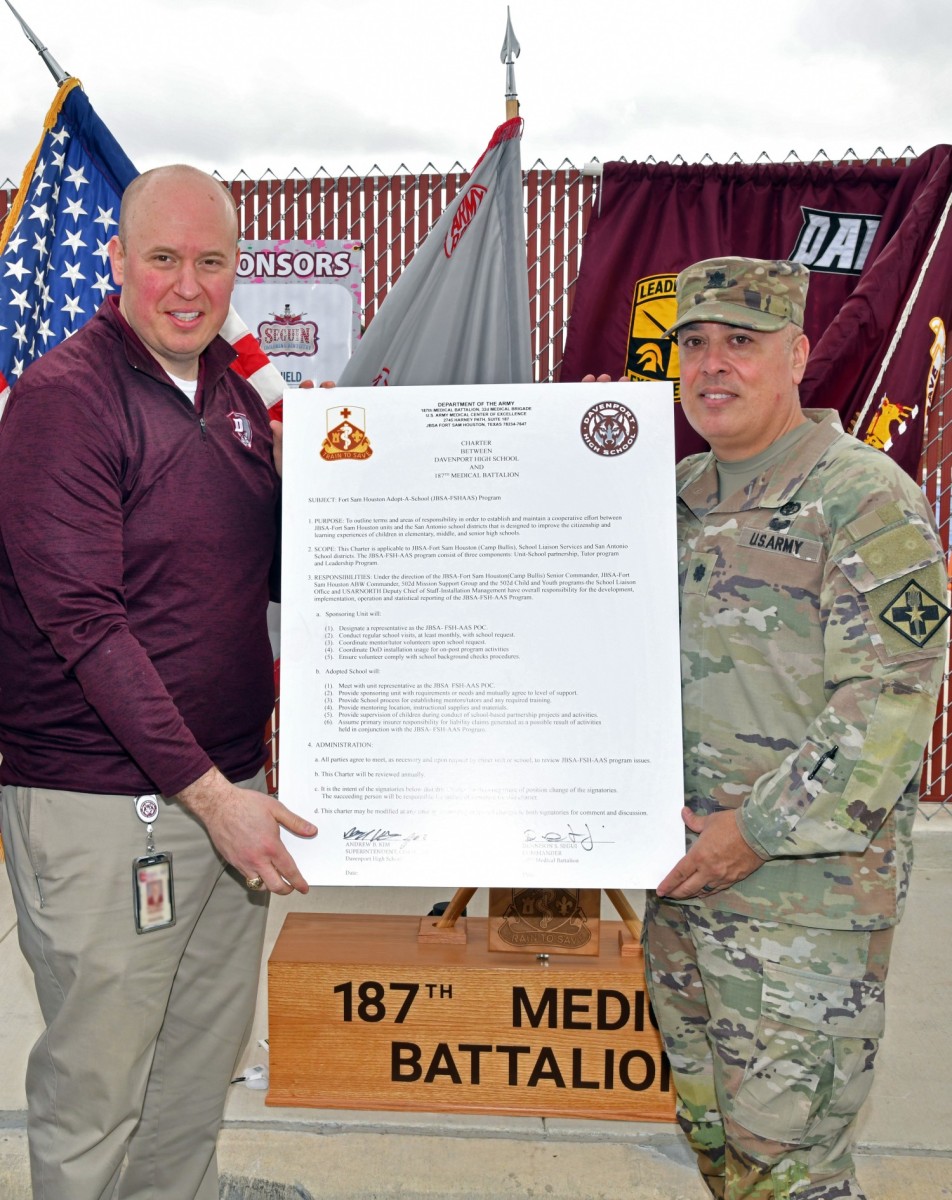 MEDCoE’s participation in the Fort Sam Houston Adopt-A-School program is not new, all MEDCoE battalions and higher units have adopted at least one elementary school they support. The Davenport charter, however, marks the first high school to be adopted by MEDCoE in recent years.

The partnership with MEDCoE and Davenport High School began when the school invited LeMaster to be the guest speaker at their Veterans Day event in November 2021. Afterwards, LeMaster met with students from Davenport Junior Reserve Officer Training Corps (JROTC) and asked what he could do to deepen the relationship. This began the process of MEDCoE working with the 187th MED BN to establish an Adopt-A-School charter with the school located in the Comal Independent School District.

“JROTC programs produce good citizens for the United States of America, and that’s what it’s fundamentally about,” LeMaster said while addressing the audience at the signing ceremony. “Great opportunities for our young people to move forward and progress and achieve their goals and dreams.”

Located at FM 3009 and Schoenthal Road in the Garden Ridge area, Davenport High School opened in August 2020. School Principal DeLoach said that when the school opened, one of the goals was to make Davenport a community center. “This charter helps accomplish that goal,” DeLoach said. “We’re involving our community more and growing, so it’s great today.”

The purpose of the charter is to outline the terms and areas of responsibility for establishing and maintaining a cooperative effort between Joint Base San Antonio-Fort Sam Houston units and San Antonio area school districts to improve the citizenship and learning experiences of children in elementary, middle and high school. The program has three components: unit-school partnership, tutoring program and leadership program. Sponsoring Units conduct regular school visits, coordinate student mentoring and tutoring, help organize school visits to Fort Sam Houston. The 187th Medical Battalion has an existing charter with Briscoe Elementary School, making Davenport High School their second school under the Adopt-A-School program.

“We are honored to begin a journey of unity and partnership,” Segui said of the school charter. “We stand here before you, committed to this relationship for years to come, charged with carrying both organizations to incredible heights on many fronts. The charter we are signing today symbolizes our mutual commitment to our community bringing together the Davenport’s “Wolves” and the 187th “Wildcats”.